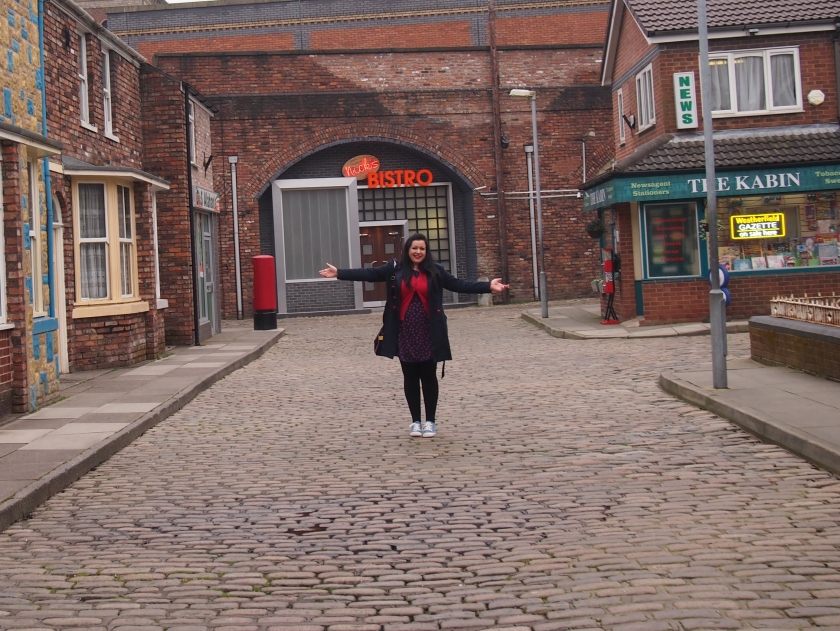 I wrote this little piece, which originally appeared on the Coronation Street Blog, to mark my first year writing for the site.

It was on the 22nd of October 2013, a year ago today, that I introduced myself on the Coronation Street Blog. The following day, I posted my first episode review in which Roy struggled to come to terms with hospitalised Hayley’s difficult decision, Sally tried to convince everyone, not least herself, that she was only with Tim for fun, Dennis felt Rita’s wrath for pawning her engagement ring, Tommy’s departure was confirmed by Tina, and Chesney’s lock up was broken into leaving him with no income.

It’s hard to believe a year has passed, and yet I’m conscious that so much has happened in between. In addition to the rewarding experience of writing about Corrie over the past year, I embarked on a number of exciting blog related missions. I’ve had the privilege of travelling to ITV in Manchester to view episode previews and meet several cast members, and while every interview has been unique, I’ve marvelled each time at the passion these actors share for their craft, their characters and the programme. I also walked the cobbles for the first time, pulled a pint in the Rovers, had lunch in the Bistro and was interviewed about Corrie on BBC radio, and I feel so lucky to have had these wonderful opportunities.

Thanks to the blog I was also able to share a survey I created as part of my MA in Film and Television Studies on Corrie fan engagement and viewership. I’m sure I would never have gotten the 339 completed surveys that made my research so rewarding without it, and it’s a testament to the passion of Corrie fans that so many completed it. You have my eternal gratitude.

I have thoroughly enjoyed the interaction with the new friends I’ve made through writing for the blog; kindred Corrie spirits whose passion, enthusiasm and dedication is unwavering. Even if they are unhappy with their beloved soap, their desire to see change is rooted in their commitment to it and the joy it brings them. They’ve made me laugh, educated me, given me food for thought, inspiration and encouragement, and the interaction is a very welcome part of my life. I’m so grateful to them and to anyone who takes the time to read my pieces.

If it wasn’t for the blog’s wonderful editor Glenda giving me this opportunity, I wouldn’t have these enriching experiences to look back on, and we wouldn’t have this great site, which I am very proud and grateful to be part of, and feel the importance of which cannot be underestimated. Coronation Street’s rich heritage is remarkable and unique, and is not only sustained on screen, but propelled forward by the threads we weave in the spaces which surround the programme. For me to have the opportunity of contributing to this vast tapestry in my own small way is a privilege I’ll always value and never take for granted.

I’m excited by what the future holds; the storylines to come, the conversations we will have about them, the words we will conjure up to give form to our thoughts, feelings and passions, and those half hours, for three evenings a week, where the world stops, and we immerse ourselves in another, so well known to us that it forms part of the very fabric of our lives. Whatever lies ahead for our favourite soap and its characters, we shouldn’t forget that sharing it together is a pleasure in itself.