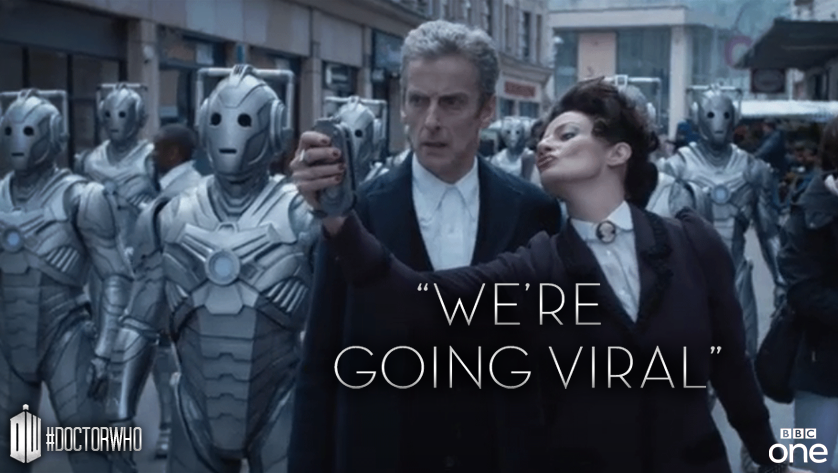 It’s a truth universally acknowledged that if you want to publicise and generate discussion on a given television programme, engaging with social media has proven a pretty good way of doing just that. Indeed, some programme makers have taken to it with immense enthusiasm, and consequently we have moved quickly on from simple factual tweets and status updates telling us what’s on, where and when as the seemingly irresistible combination of word and image has resulted in a proliferation of memes.

What is a meme?

Richard Dawkins coined the term in his 1976 work The Selfish Gene and offers the following explanation and examples “…tunes, ideas, catch-phrases, clothes fashions, ways of making pots or of building arches.  Just as genes propagate themselves in the gene pool by leaping from body to body via sperms or eggs, so memes propagate themselves in the meme pool by leaping from brain to brain via a process which, in the broad sense, can be called imitation.”

Almost 40 years on, we have the internet meme, and while it can come in many forms, where television is concerned, it mainly consists of a combination of image and text. As ideas concerning social media engagement jump from one television programme maker’s brain to another, we are presented with an imitated set of memes which follow the same style irrespective of the station or programme. But how exactly are these memes used, and what is their function? Let’s take a look at a few examples.

When it comes to memes, the BBC have been particularly prolific as anyone following their official BBC One Twitter account in the midst of Poldark can attest to. The following are prime examples of the kind circulated by @BBCOne with regard to this programme.

What I find irritating is that the memes are utterly divorced from context unless you’re an existing viewer. Here are a few more examples from the official Twitter accounts of BBC, ITV and Channel 4.

These three memes, and the two that follow from Channel 4, are without context unless you are an existing viewer of the programmes concerned. Are they likely to recruit new viewers? The three above might, but the two below don’t even include the name of the programme proving that, on the whole, they appear to exist to add pleasure for social media participants already watching. 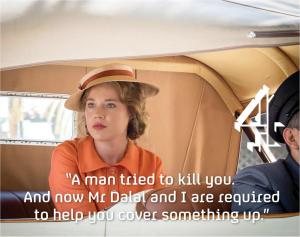 In truth, I find the above rather reductive. However, the RTs and Favourites with regard to Poldark demonstrate that they appear to contribute to viewers’ enjoyment and the BBC will undoubtedly consider them a success meaning we won’t be seeing the end of this type of thing any time soon.

I suppose Poldark, like The Muskateers, is swashbuckling period-drama lite, and perhaps there’s room for some playfulness. However, I found it hard to believe that memes were used in respect of The Missing. It felt somehow inappropriate and served to cheapen what was clearly intended to be a serious drama. My encounter with the two below made me question the one size fits all approach that appears to exist, and the idea that anything can be ‘memefied’. 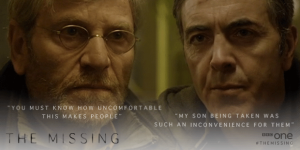 If I have a problem with serious drama being deemed meme worthy, you can be sure their use with regard to factual programming of a similar tone isn’t going to sit well with me. Take a look at these: 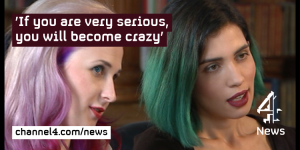 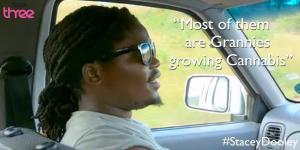 Here we have Channel 4 news making a meme out of a Pussy Riot interview. While the irony of the depicted quote isn’t lost on me, I ask, are news items appropriate meme material? The second, frankly incredible, example makes it harder to believe Jon Snow agreed to pose like this than participate in Drugs Live in the first place. Accompanying the image with text making light of the experiment conveys the message that it was less about making any serious discovery and more about getting Jon Snow to take drugs on live television. Finally, we have a man commenting on the reality behind drug smuggling in South Africa. Clearly everything and anything can lend itself to the format, so I suppose what I’m asking is, should it? Is anyone questioning this, or is the above mentioned ‘one size fits all’ approach followed irrespective of the subject matter? Am I the only one who sees it as problematic?

Back to fiction now, and one genre which is particularly prolific on the meme front, probably down to the frequency of broadcasting, is soap opera. Here are a few examples from Eastenders, Coronation Street and Emmerdale. For the most part, when it comes to soap, lines from the programme are combined with an image of the relevant scene. While some may be depicting key moments, they have no impact or relevance when divorced from their context. Again, they appear to be targeted at existing fans of the show. Here are a few examples: 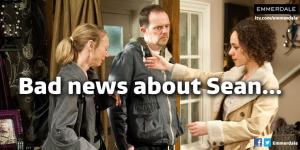 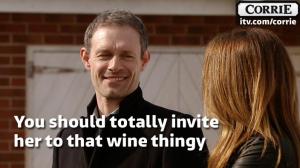 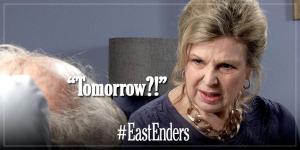 None of the above will mean anything to you if you don’t watch Corrie, Eastenders or Emmerdale. Are you likely to tune in to find out about what they mean or to discover what’s happening in them? To be honest, they’re at such a level of abstraction, you probably won’t. They simply serve to create a social media presence, encourage shares, gauge viewer opinion, and foster discussion among fans. Viewed cold and without context, they make no sense, contain nothing of the spirit of the programme, and fail to convey the remotest sense of it. This makes prior viewing crucial, not only to understanding them, but in imbuing them with life.

In the main, the other use for soap opera memes is humour. Was the Poldark psychedelic horse an attempt at coopting this? Who knows. But my concern here is that a day will come where self-conscious scripts are written with social media in mind *shudder*. I’m going to hope I’m wrong about this, but the following show how amenable the form could be to such an activity. 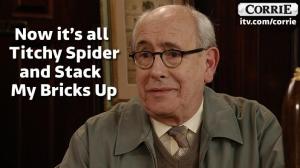 It is clear that memes are designed by programme makers to promote shows, foster a social media presence, generate discussion and encourage shares. However, while they appear to contribute to some viewers’ enjoyment, and the hope might be that they will draw new viewers in, they are often at such a level of abstraction as to make them meaningless to anyone who isn’t already watching. Encountered cold and without context by non-viewers, they are unlikely to arouse much curiosity, and, I would argue, the “in the know” nature of them could even serve an isolating function, actually proving a deterrent to potential new viewers. Finally, programme makers don’t appear to distinguish between what is meme-appropriate, and apply a ‘one size fits all’ logic. I would argue that just because everything can be ‘memefied’, doesn’t mean it should, and I wonder if others feel this way, or if any thought has been given to this.

As part of the reason for this blog is to open up a discussion around memes, I’d love to hear what you think of them via the comments below or on Twitter.