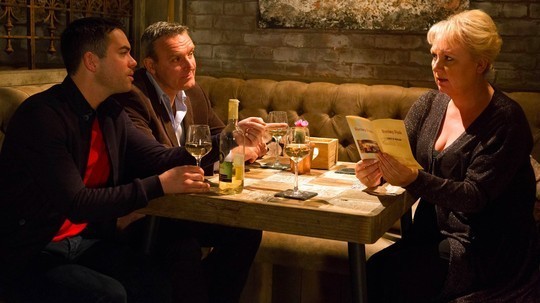 As published on the Coronation Street Blog, Saturday 6 June 2015 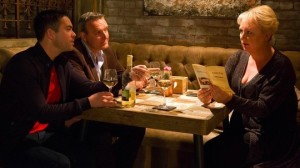 If Friday’s Corrie had an overarching theme, it was loss. The Nazirs mourned Kal, the Grimshaws peered into the gaping Todd-crafted chasm of what could have been, and Craig lost daylight hours to sleep as well as a chance to see Beth and Kirky’s mayonnaise infused homage to 50 Shades of Grey; perhaps more of a gain that one.

Dev’s reaction to Kal’s loss is to seize the day, but Julie may be misinterpreting this as a planned proposal, and Nick doesn’t want to lose Steph despite her being complicit in Andy’s deception.

Both episodes were so beautifully written by Damon Rochefort and Jan McVerry that I watched them twice. The dialogue flashed with witty exchanges and observations, none of which appeared forced, while the sensitive moments were evocative and poetic. Indeed, there were so many lines worthy of their own mention that collective praise will have to suffice.

Todd Grimshaw is a man happy to play the long game in order to get the most out of a scheme, and his attention to detail in exacting revenge made tonight’s reveal a rather enjoyable watch despite his cruelty. The prelude to his confession was nicely intercut with scenes of Seán and Jason’s mock date at the bar.

Eileen thinks she is meeting Jeff from Dubai and is as shocked as Jaseán to find Todd and Adrian waiting for her. There’s no denying that Eileen has behaved badly in stringing Adrian along, and while Todd was the architect of her demise, she did take the bait. But she is needlessly punished for it with jaw dropping callousness by her own son.

Standing there in a red top with an apple martini in hand, Eileen realises that Jeff from Dubai is indeed Todd from Weatherfield, and as both watch Adrian walk out the door, it makes his victory all the sweeter. Mocking her dreams of a house in the country, he sneers, “You break out in hives more than ten yards from the Arndale.” He further demonstrates his lack of respect of her by pointing out “[it’s] all about what you could do for him, never about what he could do for you. You see, even in your dreams you’re a doormat.”

While Eileen and Jason erroneously remark that he has always been “jealous and twisted,” Julie is closer to the mark when she asks “How did you get so cruel?” to which Todd replies, “Swimming with sharks”. He reminds them that they stood him up when he arranged a family meal in the Bistro by way of an apology for his behaviour last year, and that it is as a result of this that he ended up wandering the streets, being beaten up and scarred. “See even if I wanted to forget I can’t” he cries, “cos it’s there every time I look in the mirror reminding me you’re all two faced spineless sheep.”

He reveals to Jason how he even orchestrated the plot to split him and Eva up. As with Eileen’s betrayal, Jason provided him with the raw material when he allowed himself to become enraged with jealousy and, as Todd rightly points out, chose to drown his sorrows than fight for her. The clever part of Todd’s deception is that he knows his victim’s weakness and uses it against them.

The thing is, Todd still fulfils the role of outside observer looking in, and I can’t help but enjoy this aspect of his character. His comments on Adi and Asha being “something [for Julie] to parade around the park”, and Jason and Eva being “great for the beach shots, not so great for the gene pool. Darwin sleeps easy” are a case in point.

He appears to enjoy meting out justice on all that have hurt him and reveals more of himself than he might like when he remarks how he’d love to be “dumb enough not to be hurt by the world” and laments how he is pushed away for being “too bright, too sensitive, too ambitious”. While the former is undoubtedly true, he is wrong about the latter. Indeed, Jason was once jealous of the pride and special place Eileen held in her heart for Todd.

He departs with a comment from Julie about dying a lonely man and cries out that at least he’ll have lived. Todd is a character that continues to fascinate me and now that all of this has been revealed, I wonder what lies ahead for him.

As the Nazirs prepare for Kal’s funeral, each scene that unfolds is uniformly sensitive and dignified in its subtlety with the exception of Ken’s tactless comment about looking forward to witnessing a muslim funeral, and Roy presenting a cheque to the family on behalf of Carla. Let’s be honest, knowing all three characters as we do, neither of these incidents would have happened.

There is a poignancy to Sharif worrying about Zeedan while he himself is grieving, and it was a lovely touch to have Ken empathise with him about losing a child and express his gratitude that Kal saved Amy. The silent tears at the muslim funeral are very moving, as are the scenes between Zeedan and Alya, and Yasmeen and Sharif who talk about their heroic son in the garden. She declares herself sorry for setting the bar too high “I should’ve let him be more ordinary,” she laments, “he’d still be with us now”. But Sharif says they did that together, and it’s what made him the leader and hero he was.

Zeedan wishing for one more minute with his father to tell him he looked up to him, and Alya replying that some things don’t need to be said was a beautiful scene. Qasim Akhtar has really come into his own, and I find myself enjoying any scene he is in at the moment. Alya pledges to stay working with Carla with a view to using her and setting up on her own and this has me pondering her possible involvement in Carla’s exit story later this year.

Both Todd and the Nazirs tend to evoke differing opinions among fans, but as far as I’m concerned, these episodes were all the better for having both families centre stage.