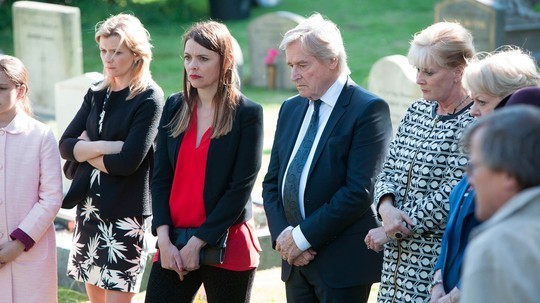 This was originally published on the Coronation Street Blog on Thursday 16 July 2015.

Chris Gascoyne’s much anticipated return was the icing on the most satisfying of cakes that was last night’s Corrie. I’ve already written about this exceptional episode this morning, and so would like to devote this particular blog to Peter’s home truths.

After Ken unleashed a well deserved tongue lashing on the ever petulant Tracy, and headed for a much needed lie down, Peter forced her to face up to how he sees things playing out in the future.

He was upfront about being scared for Amy and told Tracy in no uncertain terms that Deirdre was too. He then presented a selection of choices in what was a powerful scene:

“One of two things is going to happen.

She’s going to take you as a blueprint and be just as hated by the people around here as you are and just as alone.

Personally I’m banking on things going the other way.

I hope that she sees how much people despise you on this street. I hope she hears about every rotten trick you’ve pulled and every bridge that you’ve burned and she comes to hate you for it. I’d sooner she hated you than was hated by the whole world, because unless you do something about it, they’re her only choices.

While Peter presents two choices for Amy, he offers a third, and that belongs to Tracy. Amy can elect to be like her mother, or hate her, but if Tracy chooses to mend her ways, it may not be too late to save them both.

Judging from the child’s attitude and behaviour, it looks as if option one is already in train, so Tracy would want to act fast.

Some interesting questions have appeared in the comments section of Jordan’s episode review courtesy of an anonymous poster. This person asks those who feel that Tracy can never be redeemed what it would take, if anything, for her to pay her dues. They ask “are there any terms under which you would accept her presence on the street, or must she be sentenced to death or life in prison?”

“When will the feud between viewers and Tracy Barlow end? Can it ever end?”

These are certainly valid questions. Whenever this issue comes up, it is often remarked that it is too late for Tracy, that she is terminally villainous and it would be unrealistic for her to change at this point. But I feel it would be more unrealistic for her to continue as she always has done after last night, and so I hope she does try to change. If she doesn’t, where else does her character go?

While they admittedly haven’t committed murder, there are plenty of characters on the Street, past and present, who have done deplorable things for which they have been all but forgiven. Is Tracy beyond this purely because of the nature of her crime, or is it because of who she is?

As far as I’m concerned, yes, Tracy has committed murder and more besides, but I feel we have to believe in the capacity of anyone to turn their lives around, at any point. Perhaps the death of her mother and the wrath of her father and brother will provide her with a long awaited and much needed epiphany. And let’s face it, if it doesn’t come after last night’s episode, it surely never will.

If she does decide to take the honest path, however, surely step one would have to be confessing to lighting the candle that started the fire in Victoria Court. But where would that leave her?

What do you think? Is Tracy beyond redemption? Does it need to happen now or never? Does it even matter? What should happen to her from here on in?