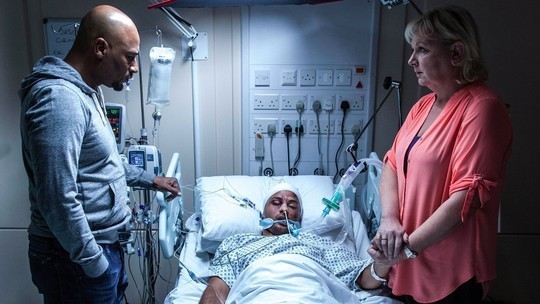 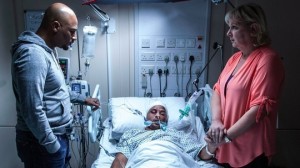 This review was originally published on the Coronation Street Blog.

Norris Cole is more likely to keep his nose out of a juicy indiscretion than I am to arrive at Saturday not having seen any episodes of Coronation Street in a given week. Nevertheless, today was one of those rarest of occasions where I watched all episodes (in this case six) in one go. So, without further ado, as I pack up my tent, and find myself reeling from Jason’s attack, I give you my review of Friday’s Corrie.

With Jason hospital ridden and in a coma, and both doctors and family fearing the worst, it is heartening, while rather sad, to see Eileen and Tony unite over their son in such dreadful circumstances. As if it wasn’t hard enough to learn of your brother’s assault from the police rather than your own mother, Todd arrives at the hospital in time to hear Eileen tell Tony that he used to be her favourite, and how she was blind to the fact that it was Jason who had been the better son all along. Bruno Langley’s tears in those moments are really effecting, and together with those of Sue Cleaver and Terence Maynard, proved the hallmark of the consistently quality performances we have come to expect from all three.

While Eileen reacts with relief and gratitude at the news that the swelling on Jason’s brain is going down, meaning he doesn’t require another operation, Tony is angry and frustrated that he can’t be woken up to reveal who attacked him. He shoulders guilt for not being there for his son as a child, and failing to protect him now. Hell bent on revenge, but with no means of exacting it, he broods over a whiskey at the Rovers; and nobody broods quite like Tony, do they.

Meanwhile Max is out of sorts having seen Jason’s beating, but unwilling reveal why. He takes to throwing out everything Callum has given him, including the toy he sleeps with and his baseball cap. Kylie and David notice this and are further perplexed when Max sees him in the street and begs them to keep him away from him. Callum is as stunned as David and Kylie as to why this might be.

There is a lovely scene where, following a football game in the garden, David and Kylie try to get him to talk, even if it’s to no avail. Finally, on hearing about the seriousness of Jason’s injuries, Max asks Kylie if he’s going to die before confessing to seeing Callum kicking him. What a little actor Harry McDermott is. His scenes are performed with professionalism and imbued with experience beyond his years, and I really enjoy David, Kylie and Max as a unit.

The Grimshaw’s weren’t the only family to take a trip to hospital as Beth’s rash is of enough concern for hardened mountainy-man Dougie to suggest a visit. While there, Hope is also given a once over at the recommendation of the worried receptionist. Diagnosed with anaemia, Fiz and Tyrone are to take her to the GP when they get home.

This departure from camp allows Craig and Caitlin to bond further over their love of art. She reveals how her Dad wishes for her to go on to study something practical instead, and Craig insists she follow her heart. They enjoy a kiss, but it’s not long before Dougie catches them. His initial fury dissipates when his daughter reveals that he hasn’t been as fun to be around of late and he becomes regretful over the revelation. It was merely a little vignette, but added a nice dimension to the comedy driven ‘man’s man’ character executed with aplomb by Paddy McGuinness.

Love is in the air elsewhere at Victoria Court. There’s not a Christmas morning that could compare for Nick as he finally wakes up with Carla. He’s rather deflated, however, to learn that she still fully intends going away and sees himself and Erica continuing as they are despite the fact that he won’t have come home that night which surely won’t go down well. The second problem is promptly sorted when Erica breaks up with him, and Roy puts paid to the first problem by encouraging Carla to stick around.

There is of course the smalls matter of the sale of Underworld (typo entirely deliberate, apologies etc.) To Sally and Alya’s offer is added a third courtesy of old friend Aidan Connor. Contacted by Michelle with Nick’s assistance, he arrives into the factory expressing an interest in buying a share. Gathering all three prospective owners in the Bistro, Carla announces her change of heart to varying reactions. Alya storms out, Aidan grins, and Sally admirably displays a rather hearty stoicism as she accepts both her fate, and her old job back. There could still be a deal in it for Aidan once he sees three years worth of books, and Nick is quickly forgiven for his well meaning meddling. It proved a strong debut for Shayne Ward. As I’ve said before, I consider him well suited as a member of the Connor clan, and it looks as if we might now safely tick the final box on the strength of his promising performance tonight.