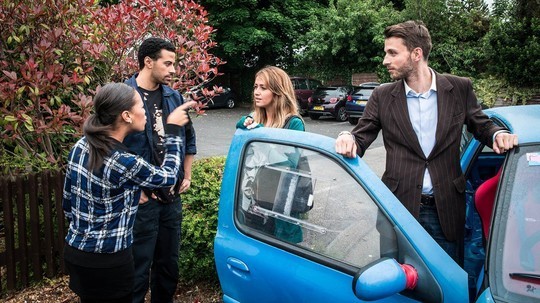 This review was originally published on the Coronation Street Blog on 15 August 2015.

Steph throws a spanner in the works when some eavesdropping goes awry and she tells Luke she suspects Maria is having an affair. Both are left mortified when they angrily confront her and it turns out she’s secretly buying him the car he wanted. While Luke manages to drive himself back into Maria’s good books, she’s concerned to learn from Steph that his love of fast cars left him hospitalised in the past.

Poor Steve. As Liz makes a valiant attempt to give away the crisps he ordered too many of, he does everything in his power to try and keep returned Rover, AKA Boo Boo the dog, from being discovered. It’s all sadly to no avail as his real owner arrives to whisk him away. What a shame, as he was a great friend to Steve.

Boo Boo wasn’t the only boo boo in tonight’s episode as Andrea sold Lloyd’s ‘Robert and the Uptights’ vinyl to help her daughter out. How could she?! It may have been worth a few quid, but nothing compared to the sentimental value it held for Lloyd. Hurt and angry, he debates what he’ll do, but the decision, like his record, is taken out of his hands, as Andrea rather suddenly packs her bags. He asks her to stay, but she can’t see him forgiving her even though he says that’s for him to decide.

Licking their wounds and drowning their sorrows, Steve and Lloyd ponder their respective losses in the Rovers and everything is strangely alright with the world.

Troubled Simon continues to disobey Leanne, and her retaliation to an attack as she attempts to stop him going to football, sees him needing stitches. I was willing Leanne to tell somebody, anybody, especially when Ken is suspicious enough to beg her to reveal what’s going on. Instead, she acquiesces to Simon’s pleas to keep their secret. He appears truly sorry, but reacts badly when she enters the gym demanding he come for tea. He asks for another chance and says he’s trying to be better. As he lies sleeping on her shoulder, she whispers apologies through bitter tears.

Zeedan is the only person who seems to bring out the good in Simon at the moment, and I feel there could be a role for him in supporting him while he works through his difficulties.

As if he wasn’t furious enough to learn about Simon’s drinking from Rita, Ken finds Tracy’s efforts to be nice “sordid” and sees them as an attempt to get her hands on Amy’s money. Tracy is disgusted, and Ken apologises for thinking she was after something. It’s not long though before he learns his suspicions were right, but simply misplaced, as she moves Robert in without his agreement.

I very much enjoyed tonight’s lovely dialogue and down to earth feel with residents floating in and out of scenes; Yasmeen politely tolerating Anna chattering on in Roy’s; Sally walking through a freshly mopped floor; Liz being the consummate landlady; Rita ordering her drinks in the Rovers, and the joy that is Amy Barlow announcing to Steph, “I’ve been told to ask for a jug of tap water, but it’s just to get rid of me” before we cut directly back to an intense discussion between the grown ups, Tracy and Ken. A delight all round.