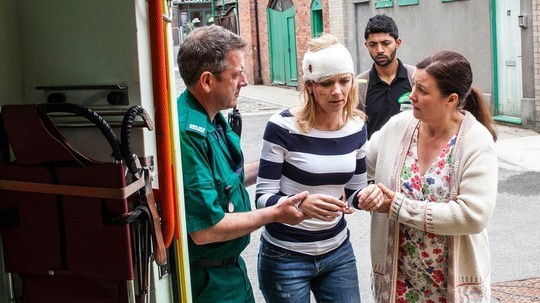 Simon continues to cause trouble for Leanne. This time, he’s sent home from school for getting in a fight. Leanne tries to assert her authority, but after blaming her for the jeers he received about his phone, and refusing to wash the dishes, he attacks her, leaving her bleeding and out cold after hitting her head on the table. Simon may have escaped the flat, but the running bath tells a tale by dripping through the kebab shop ceiling.

Comedy Dev is back, and after a rather peculiar conversation with Tim in which they appear to spend a tad too long imagining Leanne in the bath, it takes the arrival of Mary for decisive action to occur. Finding her on the floor, an ambulance is called by TV medi-drama expert Mary who nearly has to be admitted herself when the men in uniform arrive.

Simon watches from the shadows as Leanne emerges from the flat, but an oblivious Zeedan makes his presence very much known, and insists on accompanying her to hospital. After the concerned nurse leaves her with pamphlets on domestic abuse, Leanne confides in Zeedan that Simon is the cause. The actual confession isn’t depicted, we learn this in the aftermath, and while I usually balk when key moments aren’t depicted, it seemed fitting here as this isn’t a storyline that should be sensationalised. I was so relieved to hear her tell somebody, and Zeedan was a fitting confidante. I’ve long been celebrating his character development into a sensitive, intelligent, upstanding and respectful individual, and I continue to enjoy every scene he’s in. In what is a brilliant scene between the two, he tells her she shouldn’t have to put up with it, but Leanne swears him to secrecy and resigns herself to coping. This will be a challenge for Zeedan’s upstanding character and it will be interesting to see what he will do.

Heartbreaking scenes unfold as more learn the news of Hope’s illness, and while performed impeccably, and with sensitivity by all, I found myself a tad confused. Wednesday’s Corrie concluded with the doctor telling Fiz and Tyrone the tragic news that a cancer diagnosis was “very possible”. Thursday’s began with the same scene in which the doctor advised that “It could be [cancer], but we won’t know for certain until we have the results of the biopsy”. In a scene which reduced me to tears, Fiz then told Roy it wasn’t good, and they “think” she has cancer. However, in a later argument with Tyrone , Fiz declared “my daughter’s got cancer”. I wondered if I had missed something. Had the final diagnosis been given? My confusion continued in tonight’s double episode when she broke the news to Chesney, Sinead, Beth and Kirk, and nodded when Beth asked if the doctors were positive. As Aidan threatened to sack Fiz in the absence of a sick note, Tyrone intervened and shouted, “do you want to know why she’s been off? Because our daughter has got cancer.” Yet when Roy later sought certainty regarding the diagnosis, Fiz said they were “pretty sure”. This may seem like nit picking to some, but should there be such uncertainty?

Surely the news for Roy, the rest of the family and Aidan is that Hope has a tumour which needs to be tested and the results will confirm whether or not she has cancer. This ambiguity aside, Roy’s contribution has been beautifully heart rending as David Neilson unsurprisingly enriches every scene he’s in. I also enjoyed the scene between Cathy and Yasmeen as they discussed grief, and how to be there for Roy. Cathy proves she’s the perfect support and I’m delighted to see her character blossom after her liberation from the secrecy surrounding her hoarding habit. Indeed, there were strong performances from all concerned with a special mention for Shayne Ward who rose to the challenge with such sensitive material.

If I was a friend of Carla, with the best will in the world, my patience would be shredding at this point. Nick tells her he loves her and will help her despite her essentially stealing from him to gamble, but his reward is to be thrown out of her flat. Having heard about all of this from Nick, Michelle later calls over and orders her to call Steve’s therapist or they’re done. While this seems to jolt Carla out of her rut, she later tears up the business card while quaffing red wine and engaging in yet another spot of online gambling.

After Sally makes Tim believe their wedding will cost thousands, he panics and suggests they postpone it. A playful Sally reassures him that she was joking, and she’s happy to dispense with the frills in order to marry him. While this is endearing, it can’t possibly spell the end of snobby Sally, and I look forward to her quest for a classy do at bargain prices.