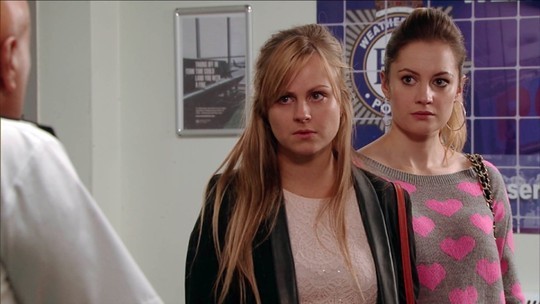 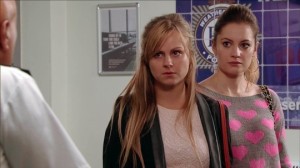 “Eh up, more fun and games over at the Platt’s” chirps a nosy Tyrone, as Kylie chases Sarah down the street pleading with her not to go to the police. Sarah still believes the body in the canal could be Callum’s and when Kylie assures her it isn’t, she begs her again for the truth.

While I can see why they had reservations, confessing all to Sarah has been a rather drawn out process, and I was glad it finally happened tonight. Before it did, however, Kylie agreed to tell her everything later, allowing Sarah time to break down in front of Michelle, reveal her suspicions about the body in the canal, and go to the police.

There was a touch of time travel between her departure from the Rovers, Kylie finding out from Michelle an hour later, going home to fill David in and arriving at the police station where Sarah had yet to be seen. Nevertheless, Kylie convinced her that they’ve too much to lose by confessing to their involvement and they leave the station. Kylie tells her, “If we were going to report this, we should have done it the night it happened”. To be fair, that would’ve been the wisest option, but I’m glad they didn’t, because we would have been deprived of that cracking live episode. At length, David and Sarah stand peering down at the wet manhole as Kylie announces “this is Callum’s final resting place”. Yet again, Tina O’Brien excels as she breaks down at this revelation.

Drama aside, there was some laughter in my house at Kylie’s comment about David lighting the touch paper on a loose cannon. A case of mixing up her metaphors, she left us with an image of David Platt running around the deck of a ship, torch in hand trying to catch hold of a wayward cannon to light. 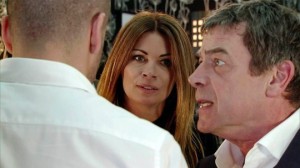 Sarah wasn’t the only one with the potential for having her fuse lit, as Luke respectfully complained at his exhaustion from working a 58 hour week with no prospect of it letting up. When Kevin cheerfully announced he’d secured yet another contract and joked that he’d ordered a Robo-Ty to cover Tyrone’s shifts, Luke warned him nicely about their ability to keep up.

Speaking of burgeoning tycoons, I’m still getting the measure of the new Connor clan, but Johnny seems like he might be a good addition to the factory. Peering through the office blinds asking “Do you employ Kirk to fulfil some kind of quota?” it’s clear that what he lacks in tolerance, he makes up for with wit.

Aidan, Carla and Johnny join Kate for dinner at the Bistro where she’s already chatting to Robert about being born in Spain but seeing herself as English which nicely dispenses with any questions regarding her accent.

Johnny did show a soft spot when he sympathised with Carla, told her not to worry, confessed to having experienced low points himself and observed “None of us are superhuman”. He has two conditions to being part of the factory however, and they are that he wants to be a hands-on manager, and for Kate to have a job. It appears she’s not as keen.

Beth, Kirk, Chesney and Sinead want to help Fiz and Tyrone in any way they can, and so they arrange for Sinead to babysit while they all go to the Rovers for a few drinks. While she was perhaps being reasonable, Fiz telling Tyrone not to drink too much in case they were needed irritated me as it added to her cumulative haranguing. Let’s just say her mithering was to no avail, as Tyrone left in rather robust spirits. 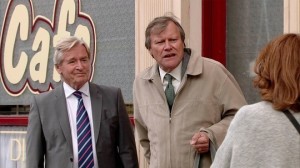 Ken and Roy debating the merits of Shostakovich and Vivaldi as they headed to a classical concert in their suits and ties was a heartening sight and the highlight of the episode for me. I loved Roy’s assertion regarding Vivaldi that “Just because his work is popular doesn’t make it any less accomplished”. Roy’s lack of snobbery or arrogance concerning what he enjoys is another charming element of his impeccable character.

After putting an enthusiastic face on it, Cathy is endearingly embarrassed to be even confessing to Anna that she is a tad jealous. She is very happy to hear, however, that he had intended inviting her, but was being a true friend to Ken who, he felt, needed the outing more. The two men return exhilarated with Roy noting, “live music does rather get the heart pounding”. A beaming Cathy proudly tells him “You are the nicest man in the universe”.

I know the camp is split on Roy and Cathy, but I’m a fan and it was brilliant to see her unselfishly appreciate Roy’s gesture towards Ken. It says a lot about her, and adds to the many other things that, to my mind, make her a fitting companion for Roy.