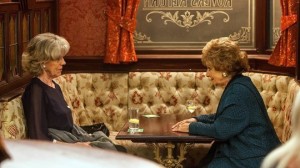 I found watching Friday’s Coronation Street to be a strange, but interesting experience. So much so, that I viewed it twice, and needed more time than usual to ponder what exactly didn’t sit right with it for me, and why before I could put the words down.

There were six threads: the Audrey-Ken-Nessa love triangle, the arrival of Marion at the Platt’s, Dev and Erica’s meal, Liz and Tony’s night out, Tyrone and Fiz’s struggle, and a very small mention of Mary and the supernatural, and sadly I found myself not particularly enjoying any of them very much. What I did enjoy was the fact that through its dialogue, the programme appeared to be critiquing and commenting on itself from within.

Take first the love triangle. Nessa’s research regarding Ken culminated in a cosy bottle of Merlot for two at his. Her interest in him is borne out of her desire to snag a man, and therefore is insincere and self serving. That she would pursue a recently bereaved widower for selfish purposes and describe his previous wife Valerie as having been “burnt to a crisp”, is all we need to know about Nessa. It’s a shame, because she’s colourful and sassy with a strong personality, and could prove an interesting addition to the street were she not portrayed as an all-consuming man-missile.

Meanwhile, Audrey confesses to Rita that she is falling for Ken, and we have our first instance of meta-commentary. Remarking that they’ve only ever been friends, she adds “I’ve never expected to see him in this way”. Audrey’s comment certainly mirrors my view on the matter, and I’ve a feeling I’m not alone. What is interesting is that while proceeding with the story, this line succeeds in simultaneously questioning and critiquing it. Audrey takes Rita’s advice to seize the day and ends up in tears having disturbed Nessa and Ken’s night in. Rita hopes the “love tsunami” doesn’t break Ken’s vulnerable heart and asks, “is he in any fit state to make his choice?” Again, while the story rolls on, a pertinent question is being asked.

Over at the Rovers, Liz lies to Michelle, telling her she’s going out with Erica when in truth she 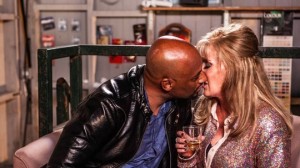 has planned an evening with Tony. The arrival of a bewildered Erica almost exposes the “pearly queen’s” glittering fabric of lies, but she gets away with her ruse for the moment.

When Erica learns the truth, she is furious with Liz, reminding her of the extent of Tony’s wrongdoing and deception. Cue meta-comment number two when Erica declares “I don’t know why you’re even listening to him. This isn’t you.” It most certainly isn’t Liz. We love our strong, feisty, been-through-the-mill-yet-still-fabulous heroine, and there’s no way on earth she’d give Tony a second of her time, never mind a second chance. Again, with Erica’s line, we have a character actively questioning the development in the midst of it occurring.

Liz goes ahead with their night out, Tony asks forgiveness, and while she says it’s a big ask, she nevertheless responds to his kiss by giving the strong sense that it won’t be their last, even though she pulls away. She may look like she’s in control by walking out and leaving him wanting more, but the fact that she’s there at all undermines her act of independence.

From meta-commentary to convenience now, as Callum’s mother Marion turns up at the Platt’s to return Max’s things, having cleared her son’s flat. She goes from wanting to see Max once a week or fortnight to deciding he’s too afraid of her and resigning herself to never seeing him again. “Well, that’s a result isn’t it” the ever-cold David sneers, and he’s not wrong, as yet another connection to Callum is dispensed with. It suited that Sarah Lou joined the myriad of characters who “stay on” when a holiday comes to an end and their family members return home without them, as there was no risk of her caving in front of Marion. I continue to enjoy David’s coolness, and particularly the horror with which Kylie now regards him, and I’m interested in how this will progress.

Next up, we have a story for a future issue of The Inexplicable. Mary may be telling us she’s always been a fan of the supernatural, but supporting evidence older than the past fortnight is scant; much like Dev’s out of the blue interest in Erica. After eyeing her up in the Street, he invites her out for a drink in the Bistro where he offers her the job in the corner shop. She happily accepts after he promises to pay her more than the scandalously low hourly rate of £3.87 mentioned initially. “Is it okay to give my boss a kiss?” is her rather bizarre response considering we’ve yet to witness any chemistry between them, thus tying up one of the most surprising developments we’ve seen in some time.

Elsewhere, I enjoyed Tyrone’s determination to give Fiz and the children a Christmas to remember, and Roy and Cathy’s reservations about Nessa and concern for Ken, but on the whole, as episodes of Corrie go, I wish I could say I took more pleasure in them, but they certainly offered food for thought.