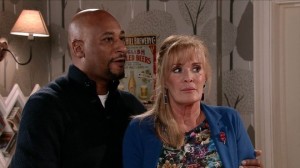 All was not as it seemed on tonight’s Corrie in which we saw Sally convinced that her demotion was, in fact, a promotion; Liz looking increasingly like she’s out for revenge rather than reconciliation; and Simon revealing that his 8 weeks with Peter was less than enjoyable. Naivety and deception are rife, and Billy, Sinéad and Seán enjoy front row seats, making them the most entertaining part of it for me.

Over at chez Barlow, it is unsurprising to find Ken calling Amy by her mother’s name, as she is clearly being moulded in her image, and doing rather well at that. Amusingly insisting on a whole new outfit for a violin exam scheduled for March, Amy nonchalantly reveals that she saw her Gran and Tony “canoodling”. She is promptly marched around to the Rovers to reveal all to Michelle who can’t quite believe her ears.

As this goes on in the bar, Tony is in the back room giving Liz the good news that he is free of Barlow’s Buys, having emptied the bank account, even revealing that he was happy to lose £2,000 in the process to prove he’s a new man. Liz seems genuinely disarmed, but not as shocked as Tracy and Michelle who walk in to witness them kissing for themselves.

Unfazed by Michelle’s downright disgust, Liz keeps up what now looks more like a charade, and gets to work on carefully planting the seed in Tony’s mind that the only way Steve will forgive him is for him to return his share of the pub. Tony dismisses the suggestion outright, but nevertheless seems to be giving it some private thought. Liz allowing Tony to pursue her again has thankfully gone from perplexing to rather transparent in the space of one episode, and while I’m amazed that a man of Tony’s intelligence isn’t even a tiny bit suspicious, it’s enjoyable to watch and both are, as ever, a delight.

I’m pretty sure hating someone’s voice isn’t grounds for demotion and I did rather wish that Sally had acted suitably aggrieved rather than allowing herself to be conned by Johnny into believing she’d been promoted as supervisor of the “sewing pool”, and consequently made a fool of. Carla may consider Sally to be a world-class machinist, but on the whole, her devotion and hard work tends to go completely unappreciated. Carla agrees to Sally’s demotion in an instant and without conscience, which is disappointing, as Sally was essentially her right hand women for some time before the influx of Connors.

Simon is back and as foul-humoured as ever. As Leanne leaves a frustrated voicemail for Peter after he failed to travel home with his son, Eva manages to get Simon to reveal that when he wasn’t at work, Peter’s time was devoted to new love-interest Sharon, All he wanted was an hour alone with his Dad, but instead played gooseberry for 8 weeks. Eva betrays his confidence and tells a furious Leanne who in turn blames Ken for handing down his womanising ways to Peter; a tad insensitive considering he’s recently widowed, but he doesn’t seem to mind, telling her, “take it out on me, by all means.” Leanne’s efforts to reach out to Simon essentially fail miserably, and even after she ends up reminding him of his abuse, he storms out.

While I guess it succeeds in furthering the plot, as it has made things worse between Simon and Leanne, I’m nevertheless disappointed by Peter neglecting to take even an hour out with his son. I’m particularly annoyed at his failure to accompany him back to Manchester on the train; not so much for Simon, but for those among us who would have welcomed the opportunity to, erm, assess his progress. We can but live in hope.