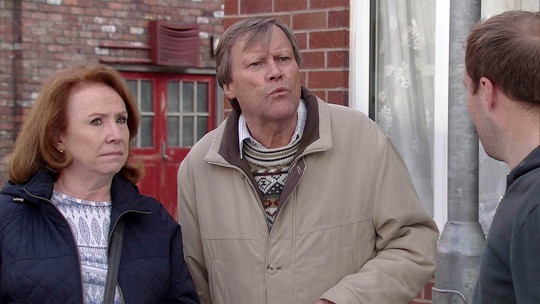 Debts appear to be mounting for Tyrone, with Fiz none the wiser. Considering the manner in which she often treats him, I’m not surprised he’d try to deal with it privately, even though that probably isn’t the best idea. As the battle mounts between what he can afford, and what he wants to be able to, he buys an inflatable Santa for the front of the house, and makes Fiz believe it’s a gift.

The suggestion of help from Roy to inflate it is met with disdain from Tyrone and is followed by some deplorable treatment when they arrive home from the hospital to find it deflated. Sure, the money worries have him stressed, and he wants to give Hope a perfect Christmas, but none of this warranted his behaviour towards someone who has been consistently good to him and, as street residents go, is one of the very best. Nor was it typical of Tyrone, even in the worst of circumstances, to behave in such a fashion.

Cathy continues to be Roy’s champion, and not in the aggressive way some are on t’cobbles when it comes to defending their other halves. She is delicate and subtle, yet solid. Nor does she dismiss the offender, encouraging an awkward Tyrone to stay and chat with Roy over a brew. Her reaction is similar to Roy’s in that he forgives, and remains concerned about Tyrone despite his poor behaviour. Roy feels there might be more to the aggression than meets the eye, however, and guesses it might be money. Calling to their house, Roy tactfully and sensitively offers Tyrone financial assistance, but his pride won’t allow him to take it, and after Roy leaves hoping he hasn’t embarrassed him, Tyrone dials a loan company.

If you put his refusal to take help down to anything, it must be the manner in which he’s regularly emasculated by those around him, including his own partner. It follows that his inability to stand up to those he should sees him assert himself with one he shouldn’t. I feel the real Tyrone, finding himself in the circumstances he’s in, would swallow his pride, and take Roy’s assistance; after all, the consequences for his family of not doing so are too gre

Things go from bad to worse for Steph as she begins receiving messages from friends who have seen the pictures Jamie disseminated online, and her parents find out. As she cries in the Bistro kitchen, Leanne shares her own stories of humiliation, offering words of encouragement about how she can deal with it.Meanwhile Luke and Andy are roughing Jamie up at his local and revealing his true colours in front of a potential next victim who tips a pint over his head before storming out. As they leave, Steph, Leanne and the police conveniently converge, and Jamie is arrested.

While this was an interesting and important subject to tackle, I’ve not really enjoyed this storyline, namely because of the manner in which it has played out. From the start it has struck me as an issue seeking a plot.

In any event, I found it questionable that, following Jamie’s arrest and Andy’s suggestion of a weekend away, Steph would joke about going somewhere without internet access. I half expected to hear canned laughter followed by some comedy exit music and the credits rolling over a freeze frame. It would have been far better, and more realistic, to see Steph escorted away in tears as she prepares for a period ahead of coping and coming to terms with it all, but thankfully surrounded by those prepared to support her through it. Instead, I fear we will see her back to normal by Monday, breezing around the Bistro in the refreshing way she normally does. I do, however, look forward to many more stories involving the brilliant Steph.

I love how Jonathan Harvey writes for Mary, and she looked positively glowing as she enjoyed a drink with Brendan in the Rovers. She’s overjoyed to be asked to accompany him to a convention; that is until he rather slyly drops the bombshell that he’s married. Patti Clare’s performance was second to none as Mary’s heart broke in her eyes, and she fled to the bathroom. Her dignity in the face of being so cruelly deceived spoke volumes as to her character and showed Mary at her best.

It’s a shame that Norris and Rita have incessantly sneered at her new found joy, and in the aftermath of Brendan’s revelation, Dev proves himself to be a better friend than either of them. There was thankfully nothing patronising about the scene in which he respectfully offered her kindness and a shoulder to cry on if needed without embarrassing her by putting words on it.

I think I was as disappointed as Mary to learn Brendan was married; not so much because I thought they were well paired, but because I feel it high time that Mary had some joy and a storyline that brings out the best in her. I hope she’s whisked off her feet by someone better deserving as she picks herself up from this inexplicable disappointment.

Meanwhile Simon has been to counselling but Leanne tells Robert and Eva that he remained silent throughout. I do love Eva, but it’s as if her funny laugh and often inappropriately timed gags have become ‘a thing’ now, and I’d find it regrettable if she was to slide into the ‘comedy Gail’ category. She’s better than that; and so is Gail.

Over at the gym, Sharif still has reservations about Gary, but Zeedan encourages his grandfather to give him a chance, reminding him that it was Alya, not Gary, that compromised their relationship, and telling him that he no longer wants to work there himself. While Sharif accepts his grandson’s desire to move on, what really seems to resonate is Zeedan’s talk of Gary’s connection to Kal through the army.

Bolstered by Gary’s discovery and eviction of a gym goer on steroids, and without taking any time to think about the situation, Sharif promptly offers him the job of manager, and Zeedan tosses his badge in his direction. Failing to think has Sharif in a situation where he has offered an irrevocable contract to someone he has doubts about, and so I thought he might at least sleep on this latest decision. In any event, I look forward to seeing what lies ahead for Zeedan as he departs the gym. I have high hopes for one that has fast become one of my favourite characters to watch.