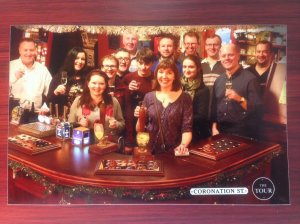 The 2nd of December was far from an average Wednesday. It began with a flight from Dublin to Manchester to meet with my Coronation Street Blog friends, to tour the old set one final time, and enjoy a welcome catch-up over dinner at Annies restaurant, owned by the lovely Jennie McAlpine.

I was very excited at the prospect of seeing my fellow bloggers again, retracing my steps on the Corrie Tour for the last time, and sharing what was sure to be an enjoyable evening together. With such welcome prospects ahead, it’s difficult to contemplate how there could be an inkling of melancholy, and yet there was.

Before Coronation Street The Tour opened in April 2014, I was lucky enough to attend an exclusive preview on behalf of the blog, and the frenzied excitement of getting the whole thing up and running in advance of the first tranche of visitors was palpable. This was my first visit to the cobbles as well as my first Coronation Street Blog mission, and so it has a special place in my heart. I was also there in November 2014, again on behalf of the blog, this time, to preview Christmas on the Cobbles. On that occasion, everyone was working hard to infuse the old set with Christmas cheer. The roof of the Rovers was still in the process of being sprinkled with snow while carolers practiced and lights fresh from the working Media City set were being restrung.
With now just under 4 weeks left of the tour, I found it rather sad and yet fitting, having witnessed the start of it all, to be there for the very end. And so we gathered in the dark at rush hour on a wet, sodden Manchester evening to say our goodbyes to the old set as rain lashed the greasy pavements and made headlamp and taillight puddles shimmer as cars hissed by.

Martin from the Corrie Tour lit up the entrance with the warmest of welcomes, and it wasn’t long before we found ourselves gathered in the ‘actors only’ room where Corrie stalwarts, past and present, passed their spare time. Not just haunted by their pigeon hole names on this occasion, a number had since autographed the wall.
We were joined by the wonderful Jonny Grimshaw, Coronation Street extra and tour guide extraordinaire, and having him accompany us around the set for such a special visit was the icing on our Corrie cake. He was ably assisted by fellow guide David Owen who was also very knowledgeable and enthusiastic, and they made for an entertaining duo.
As we were on a VIP tour, we had full access to the indoor sets, and didn’t let the opportunity go to waste. Lolling on Carla’s sofa, climbing the Platt’s stairs to nowhere, stroking Jack’s stuffed pigeon and leafing through copies of Hiya magazine were just some of the advantages, and taking photos for posterity was another bonus.
One of the highlights was having a glass of prosecco and raising a toast in the Rovers as well as gliding through the beads from the back of The Kabin to take up residence behind the counter. This latter set was a welcome surprise as it wasn’t there the last time I visited, and as there wasn’t a tour coming directly behind us, we had plenty of time to take it all in, and that included the street.
As the doors opened, and we beheld this view for the last time, it really was quite something. On my previous visits, it had been day time, but it was pitch dark now and the slick cobbles spotted with puddles sparkled with the reflection of fairylights and cosy windows from the homes we know so well. It had miraculously stopped raining, and all was still and quiet with the exception of Christmas music which wafted through the night like steam from hot mince pies.
As I stopped outside what was the Duckworth’s, Bing Crosby’s voice filled the air with the words “I’ll be home for Christmas, if only in my dreams” and I found I had a lump in my throat for all it signified.

One of my fellow bloggers remarked that it was as if everyone was home for the evening, tucked up inside as we walked the street, and it very much felt like this. These quiet moments when we had the cobbles to ourselves were magical, and I’ll always treasure that memory; indeed, the street never felt more real.
As we tiptoed down the ginnel, bathed with the gold of the streetlights, we heard past scenes and voices ring out all around us. Our blogger Stevie Dawson captured my husband and I in this moment in a photo I’ll now always treasure. Having strolled the length and breadth of the street, a number of us paused at the railings of what was the Medical Centre to take it all in and talk about how truly remarkable a thing it was and how hard it is to believe that soon, it will be no more.
When the time came to leave, we walked the length of the street together, turning in front of the bistro to look back at it for one final time, pausing to take it all in, soaking up every detail and immortalising it, and everything associated with it, in our minds.
It’s funny how the end of something, while instilled with a heavy finality, can at the same time feel as if it is never more alive than at that moment before it disappears forever. While each visit had magical memories for different reasons, the street never looked more beautiful to me than on that night, and I’ll never forget it.

We spent the rest of our evening chatting, laughing and sharing stories in the Old Grapes, a pub once owned by Liz Dawn, followed by our much anticipated meal in Annies. Jennie McAlpine was on hand to welcome us to her restaurant and proved to be an excellent host.
While we may have been there to say farewell to an important piece of history which holds such a special place in our hearts, the relationships we have forged because of this brilliant blog should assure writers and readers alike that the past will not be forgotten. It is for this reason, and many more, that I’m both proud and privileged to be a part of it.
By Emma Hynes
www.emmahynes.wordpress.com
Twitter: @ELHynes
Coronation Street The Tour ends on 31 December 2015 to make way for redevelopment of the site. Find out about ticket availability here.
This post was originally published on the Coronation Street Blog on Sunday 6 December 2015