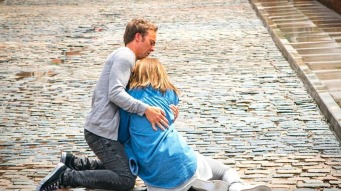 A review like this is not easy to write. Why? Because it attempts to capture the essence of something that has cut to our very core, that for which raw emotion is the only viable substitute for words. It’s hard to think of last night’s Coronation Street as a construct, so competently did its parts succeed in coming together to form that intangible something that has had audiences rapt for centuries. But, like such plays and dramas preceding it, the secrets always lie in its careful crafting. Nothing is accidental. Not the inclusion of Beckett’s Waiting for Godot, not Maria’s splash of red jam, not the fish colouring book, not the open blue sky that becomes encroached by trees and cables as death lies in wait. In the hands of Chris Fewtrell, this was always going to be special.

Kylie’s new energy infused the first episode with a fresh optimism at the prospect of going somewhere where she had no past. “It feels like it’s been throwing it down my whole life” she told David, “I can finally chuck the umbrella and catch some rays.” To Gemma, she declares, “Life’s what you make it, if you don’t like it, you change it. That’s what I’m doing.” And after a beautiful scene with Gail in which she appeals to her love for David to make her understand why she needs to leave for Max and Lily’s sake, she announces to Audrey and Freddie“I get a shot at the person I always wanted to be.” 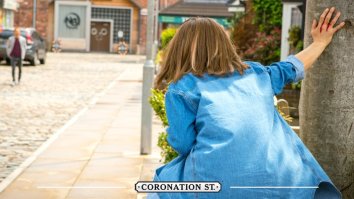 Of course, knowing as much as we did meant each of these lines were charged with a tragic inevitability. As she emerged from the Rovers on the phone to David, champagne in hand, and he exited the Bistro with Bethany, Max and Lily, cutting back and forward between them talking as they walked towards one another signalled the impending gulf between them. She appeared already unreachable by them, unable to be saved.

As I watched, I couldn’t help thinking about the claims that it would be something that had never been done before, and as Clayton attacked Gemma outside the kebab shop, and Kylie ran towards them, I was in denial that this could be what was to happen. Even as Clayton stabbed her, I couldn’t believe that that would be it, and spent the intervening half hour wondering at the possibilities. Maybe she stabbed Clayton with the bottle? No, he was clearly wielding the knife. Maybe there’d be a twist, like there was with Tina McIntyre? No, as it transpired. Kylie Platt would meet her end being stabbed outside a kebab shop.

If we had been told this in 2010 when she first blazed on to the cobbles, we might have been less surprised. But I initially thought, considering how far she’s come, she deserved more than to meet her demise at the hands of someone who just entered the show and in such circumstances. But such is life, and therein lies the tragedy. What she had been waiting for was finally in her grasp, but would never come to pass.

The second episode was a masterpiece. As Kylie lay cradled in David’s arms on the cobbles, between the salon and the Rovers, Jack P. Shepherd and Paula Lane put in the performances of their lives. The love between the pair, the account she makes of her life in her dying moments, his desperation to stop it all from happening, was so beautiful and raw, you truly felt you were intimately witnessing a real death. 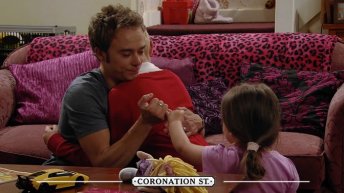 Those looking on as they waited interminably for an ambulance were fittingly sparse and quiet. A sober Gail offers immense support, an incredulous Bethany weeps, Roy, with futile first aid kit, delivers with delicacy the sad realisation that “I don’t think there’s much we can do that you’re not already doing” and Sally offers one of the most powerful lines I’ve heard on the Street in some time, “it’s always just another day.”

Kylie’s final words are fittingly resonant. “It was great wasn’t it. We were great.” As she slips away, and broken hearted David lets out a perishing cry, I defy anyone not to be deeply moved. As he later told the children the news, I was similarly floored.

Now that I’ve seen it, I must say that I can see no necessity for us to have known in advance that she was going to die, and the potentially misinterpreted claim that what happened has never been done in soap before unfortunately has some people complaining instead of focussing on what was different, innovative and brilliant about its aftermath. It’s quite clear now that if Corrie had intended for Kylie’s actual killing to be ground breaking, Gail would never have mentioned Brian Tilsley. I would have also had Gemma find out the news in a more sensitive manner, and I would have reserved the Kate and Caz scenes for another day. But to address the criticisms of others, Craig’s inaction, the proximity of the quite possibly closed medical centre and the length of time it took the ambulance to come are all simply viable circumstantial threads in the tapestry.

This powerful, unforgettable departure for Kylie, and by extension, Paula Lane, was a masterpiece in writing, performance and direction. It shows what Coronation Street remains capable of, and I hope with all my being that we see more of it.

“We’re going to live our lives in colour” David tearfully assured her before evoking immense sympathy by revealing that he’d been looking on the internet at the kinds of fish you can see snorkelling in Barbados. Later held in bloodstained hands, all that remained of that dream was an aquatic themed colouring book.

I leave you with Beckett, whose words from Waiting for Godot provide the most apt of conclusions.

Estragon: I remember the maps of the Holy Land. Coloured they were. Very pretty. The Dead Sea was pale blue. The very look of it made me thirsty. That’s where we’ll go, I used to say, that’s where we’ll go for our honeymoon. We’ll swim. We’ll be happy.

See also The Incomparable Kylie Platt in which I take a look back at this great Corrie character.