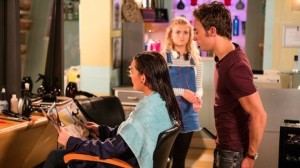 Let’s cut straight to the chase, pun intended, David Platt was the highlight of Friday’s double Corrie. Struggling with grief despite putting on a front, and even joking about it, he’s forced to face up to his feelings when Bethany admits to missing Kylie, and Gail confronts him over the bloodstained hoodie hidden under his pillow.

I didn’t agree with the unquestioning suspension from school of both Bethany and Lauren, and with the return of Brian Packham in the offing, one would have to think it would have been handled differently had he been in the hot seat. It’s not clear why Lauren decides to pay the salon a visit, but it’s convenient as Bethany is alone while helping the temporarily absent David. On his return, he appeals to the pair to make up, using Kylie as proof of how serious confrontation can get. He dupes Lauren into having an olive branch wash and blow-dry, and Bethany into going for ‘posh coffee’.

Once alone with Lauren, he insists she end her bullying campaign. When she resists, she ends up getting the ‘choppy bob’ she never asked for. I could only imagine the Renshaw twins beside them, saying nothing but looking disapprovingly on as they did when Audrey gave Nessa a dodgy do. Although if that was the case, David might have stopped short of warning Lauren that it will be her throat next time if she messes with any of his family again.

We’ve seen Weatherfield police arrive slower at murder scenes than this bit of hair shuffling off its mortal curl. David is nonplussed, but the same can’t be said for Bethany who now has more than the cancellation of her gym membership by Sarah to worry about. Having entered Lauren’s name in the book as if she made an appointment, David tells the police she simply changed her mind half way through the cut, and failed to pay at that, despite being given an expensive treatment.

Much like the school meeting, apparently hearing two sides of a story isn’t enough to take measured action, and the police still see fit to arrest him for affray and false imprisonment. Gemma revels in the drama and adds that she witnessed the whole thing and would be happy to make a statement; unnecessary and unlikely, I would’ve thought, considering Gemma’s general attitude towards the police.

Despite chauffeuring both to the station, it all appears to come to nothing as they don’t seem to have enough evidence to charge David with anything; a fact I would’ve thought they’d have established from the off and saved themselves the petrol.

On release, Gemma suggests they celebrate, but David isn’t interested, telling her it’s not a game. Back home, he assures Gail he’ll bin the hoodie, and anything else that prevents him from moving on, which makes his subsequent sending of a friend request to Macca (AKA Cormac Hibbs) from a social media profile in the name Mark Bailey, all the more chilling. I’m looking forward to seeing how his grief will manifest itself next.

We’ve long known that we’re unlikely to see Maria in the Mastermind chair any time soon, but she reached new lows tonight. Considering how he’s been treated, it was quite a feat for her to convince Luke to give up a night with the footie lads at the Taj to attend the Regional Stylists’ Awards with her, and in a tux too. Rita’s resulting beer mat wafting swoon as he pitched up in the Rovers did make me giggle.

If Maria’s Persuasion worked, however, her Sense and Sensibility went out the window when she ditched Luke yet again for a tearful Caz who was upset on missing her chance at a job interview after an altercation with Kate, and an early bus. Interestingly, Kate appears to suspect a connection between Caz’s newfound role as Maria’s bodyguard and the break-in, an assertion which results in Caz grabbing Kate, the latter shaking her off and spilling coffee on her interview suit with possibly the first paper cup in the show’s history to have anything in it.

Grieving for the army she couldn’t get further away from, and lamenting how she enjoyed being told what to do and can’t cope in the ‘civvie’ world, despite getting on just fine up to now, Caz definitely has Maria wrapped around her little finger. Maria then gets tearful over her world falling apart with the infidelity and death of Liam, and the sorry pair set their sights on a takeaway and a bottle of wine. In truth, it’s hard to feel pity for either of them. 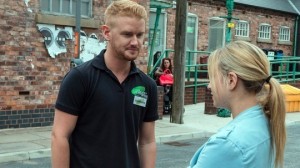 Whether there’s a spark between Gary and Sarah or not, the sight of them talking in the street leads Izzy to realise and accept that some day he’ll want to move on with someone else, and she doesn’t want to be the albatross around his neck. I was glad to hear this, and while I’ve never thought of Gary and Sarah as a couple, there could be something in it.

I like the friendship between Craig and Faye, and her encouraging him to write a letter to his Dad which he could burn afterwards was lovely. Even if he made a smart comment about her own situation with Miley, which was unbecoming of his character, she unflinchingly persisted. He later bins his list of questions for his Dad, but she winkles the name of the prison from Kirk. We’ll have to wait and see what she does with this information.

Despite being fully aware that it’s only for a few nights, Todd announces to Eileen that he’s moved in with Billy, leaving the reluctant vicar uncomfortable and the too proximate Sean upset. Todd takes to the rectory like the faithful to prayer, but Billy interrupts DVD and pizza night to ask if his lodger is flat hunting and to reveal he’s not ready for such a big step. This results in Todd storming off, and the tempestuous start to their relationship persists. Billy’s not the only one hesitant in this regard, as Aidan continues to waver. However, he finally agrees to move in with Eva after being pressed yet again, and she’s predictably over the moon. Knowing what we know, will it all end in tears for poor Eva as it has so many times before, or will Aidan manage to keep his secret?

Again, David Platt was my highlight of this double with some great scenes and plenty to want to stay tuned for.

Look to the past, to the ones who paved the way, and you'll find them.
All we need.
Sun Day
Together or separate?
5k.
Good morning. 💙🌞