Roy Cropper spoke of lemon drizzle when he explained Aristotle’s golden mean to a politely baffled Rita in last night’s Corrie, but this philosophy on achieving balance between extremes held a message for Pat Phelan, deficient in morals, and Michael Rodwell, reckless in his pursuit of the truth, as the battle between the pair came to a head with devastating consequences.

Having had the scam confirmed by Anna after she heard a voicemail on Phelan’s stolen mobile, Michael goes to the site for evidence while she distracts Pat. Not convinced by her offer of £2,000 to leave Weatherfield, the game is truly up when Phelan hears his lost phone ringing and learns from a delivery man that someone fitting Michael’s description has just accepted a delivery. This leads Pat straight to the site where he catches Michael just as he finds the fake passport and ticket to Mexico.

What ensued is arguably one of the darkest events we’ve seen on Coronation Street, as Phelan calmly allowed Michael to die of a heart attack without offering any assistance. We’ve seen some tragedies unfold on Corrie over the years, but there is always a safety and security running parallel, whereas the site of the false flats holds no such comfort, and it’s for this reason that it was fitting for it to occur off the cobbles. It told us of an otherness, a horror, that lurks beyond its parameters, but nevertheless hides in plain sight.

Phelan’s Ride of the Valkyries ringtone reminded me of Francis Ford Coppolla’s Apocalypse Now in which the strains of this third act piece by Wagner feature. Those who’ve seen the film will know of the formidable Colonel Kurtz, and it was as if Phelan himself took on this role, holed up in his false kingdom. “Horror has a face, and you must make a friend of horror” Kurtz declares, “Horror and moral terror are your friends. If they are not, then they are enemies to be feared.” It strikes me that somewhere along the way Phelan has adopted a similar stance.

Kurtz, of course, is pursued by someone in search of truth, and Apocalypse Now being an adaptation of Joseph Conrad’s novel Heart of Darkness, there is a parallel to draw between Michael and the book’s character Marlow in their decision to leave safety and certainty for the unknown in pursuit of their Kurtz. “It was written I should be loyal to the nightmare of my choice” spoke Marlow, “I was anxious to deal with this shadow by myself alone.” This was Michael’s downfall.

The predicament in which Phelan found himself as he was faced with the realisation that Michael knew all was an interesting and complex one which revealed a lot about him as a person. It registers on Michael’s face that his death is the only viable option as far as Phelan is concerned. As he appeals for mercy and tries to persuade Pat to do the right thing, Phelan does seem to struggle with the deed, searching deep within himself for the capacity to do it.

We’ve long wondered at the existence of Pat’s conscience. Were we about to see evidence of it? When Michael suffered a heart attack, Pat’s solution was presented to him and he saw it as a blessing which spared him having to kill him and even saw him likening himself to one of Napoleon’s ‘lucky’ Generals. The only way we could possibly see his conscience now is if he called for help, but he didn’t.

When Kylie Platt lay dying in the arms of her husband, she told him, “That’s the David Platt that I loved. The kid who cried when his rabbit died”. As cold and calculating as David has proven himself to be, we also know of his capacity to love and to feel emotion. Maybe this is why he can be villainous, but at the same time, is not considered a Corrie villain in the traditional sense. However, as Pat Phelan calmly watched Michael die of a heart attack, we learned of a very different childhood experience concerning a rabbit.

Our first insight into Pat’s life prior to his appearance on the cobbles would be a chilling one as he recalled being a child with an air rifle, setting out to kill the creature instantly, but fatally injuring it instead. While he claims his nature wouldn’t allow him to put it out of its misery, he nevertheless watched it die, and was able to recall its final moments in some detail which, for me, was the most sinister element of his recollection. As Pat did exactly the same to Michael last night, we can surmise that he has had this in him since he was a boy. 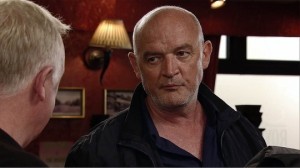 The logic he uses to divest himself from any responsibility for Michael’s death adds another dark dimension. Watching Michael suffer without a glimmer of conscience, regret, doubt or anguish, he tells him of the rabbit, “I felt really bad Michael, ‘cos it was my doing, you know. But not this time. It just so happens your time’s up.” Phelan’s warped justification for his lack of feeling or action gives us a chilling insight into his mindset.

But what of his claim that he’s too ‘soft’ to be a murderer? Can this really be the case, or is it perhaps cowardice? The only hesitation he showed was at the point where it looked as if he’d have to kill Michael and while he did say he’d ‘make it quick’, we’ll never know if he’d have done the deed had fate not intervened. What we can be sure of is that we know more about Pat Phelan after tonight, and what one of Corrie’s greatest villains might be capable of.

All of this unfolded courtesy of compelling performances from Connor McIntyre and Les Dennis and a stellar script from Chris Fewtrell. Also of note is the fact that we had no idea how this would play out, which undoubtedly contributed to the fact that I was on the edge of my seat throughout. It’s great for Les Dennis to have been given such special episodes to depart on, and for Michael to have stayed true to himself to the very end.

This piece also appears on the Coronation Street Blog.