I always look forward to my trips to ITV in Manchester, and while yesterday’s was no exception, a rather different prospect lay ahead of me on this occasion. Travelling on behalf of the Coronation Street Blog to view last night’s heart rending episode in which Michelle tragically lost baby Ruairi at 23 weeks, I would also be interviewing Kym Marsh, Simon Gregson, producer Kate Oates and Erica Stewart, a Bereavement Support and Awareness Specialist from the stillbirth and neonatal death charity, Sands, about the storyline.

While Kym is portraying the experience of her character Michelle, there is an added dimension in that it is a subject very close to home for the actress, having suffered the loss of her own baby Archie eight years ago. Simon Gregson and his wife Emma Gleave also lost a child at 21 weeks and 4 days, so both have lived through the experience.

I’d like to say firstly that this day was handled with such reverence and respect by the people at Corrie, that it was a privilege to be there, and Kate, Kym and Simon spoke with such honesty and conviction about the experience and why they felt this was an important story to portray.

Kym said how glad she was that they chose to do the storyline, a decision which was very much left in her hands. “Kate approached me very early on about the storyline and said to me in no uncertain terms that if I did not want to do this I did not have to do it” she explained, and after speaking with her children, and having a long conversation about it with her Mum, she decided to take it on. “My Mum said to me, ‘What is your gut instinct, because that’s usually the right one.” she explained, continuing, “I said ‘my gut instinct is to do this’, and she said, ‘why?’ and I said, well because I’ve always tried to do my bit for charities that fund research or help people to discuss and talk and heal around baby loss and I felt what better way to raise awareness of this subject and to help people in some way. So that was my reasons behind doing it with the hope that that may happen, and also to honour my son, to be quite frank, because when you lose a baby, it’s not something that ever, ever leaves you.” She continued, “learning to accept what’s happened to you only comes from talking and I think this subject has been very taboo for far too long and I think people should share, because sharing is absolutely imperative to being able to put the pieces of your jigsaw back together somehow, and that’s what I’m hoping people may gain from this.” 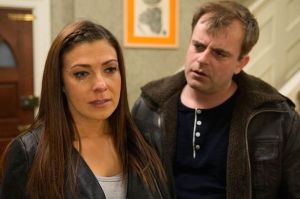 Kym acknowledged the challenge it posed for her, adding, “it was quite tough, but I was absolutely looked after, we both were, from day one.” Kate was very conscious of her duty of care to Kym and Simon considering the circumstances, and there was a psychotherapist on hand for them 24/7. On meeting him for the first time, Kym wasn’t sure what she might need from him. She explained, “in truth, I didn’t know what was in the box til I lifted the lid off. Who knows. It’s been 8 years since my son died.” She continued, “You never get over it but you learn to live with it and you live with that every day and it’s not something that will ever leave. But then diving back in and putting yourself back in that delivery suite, back in that place where you’ve spent years coming out of, I’d no idea where I would be. But it strangely helped me to realise that, actually, I think I’ve accepted that that happened to me. There’ll not be a single day that goes by that I don’t think about him and I will never, never, never get over it, but I accepted that this happened to me and I’m able to talk and I’m able to reach out to other people that have been through those situations.”

While Simon talked of it being upsetting to watch the scenes back, they are both so proud of them, and of the crew who Kym described as “outrageously good” adding, “[they] were so respectful throughout the whole thing”. Tony Prescott also received high praise for his direction, and special mention was made of the quality of the scripts, how having Sands on board was brilliant, and how supportive their fellow cast members were.

Kym and Simon also agreed that being as close as they are definitely helped, and that it would have been far more difficult otherwise with Simon explaining, “You’ve got to trust the person you’re with to do such serious subject matter.” Kate watched the episodes with them and welcomed the glimpse it gave her into their working relationship, how they support each other and respect one another’s work.

Kym was consulted a lot through the storyline, and explained, “We wanted to very much show the whole journey and what happens and everything. And although Michelle’s journey is different to Kym’s journey in a lot of ways, it’s also very similar in some ways, but I did have a lot of input in that, because I was allowed to.” Kate added, “I think it was important, because, asking Kym to play it, I wanted to make sure that we got it right, that she could endorse it, that there were no surprises, and that all that fitted.”

After sitting with Kym to talk through her story, they undertook research which included listening to documentaries and podcasts, reading blogs and forums to pull all different experiences together. Kate explained, “when we put the storyline together I took the quite unusual step of showing Kym the storyline, which I don’t think I’ve ever done before. Reading it in storyline form beat by beat before it even hit scripts, before the writers had even had it, Kym read it.”

Simon discussed how the father can feel completely helpless in such a situation, and that Steve’s grief comes afterwards as he prioritises supporting Michelle.

One of the things that shocked me, and which I wasn’t aware of, was that they couldn’t be provided with a birth certificate, as the birth occurred prior to 24 weeks, and this, along with the term ‘late miscarriage’, Kym explains, are genuinely upsetting aspects of the experience for many women. “The other thing that we’ve discussed as well is the terminology” she explains. “The late miscarriage. That was one of the things that really got to me when they called my son a late miscarriage, it really annoyed me, it angered me because I’d just given birth to a baby. I didn’t miscarry my baby, I gave birth to him. Why is there no birth certificate? The clue is in the name, birth certificate. I’ve just given birth. So, why? Because he didn’t survive? Because he was not viable? What is that? When I’m not here anymore, no one will know my baby ever existed, and that’s the thing that upsets a lot of women, I think, is that thing where you can’t have a birth certificate. There are a lot of babies that actually do survive from 22, 23 weeks, they’re allowed a birth certificate, why can’t they have a birth certificate?”

Kate Oates sees this as an opportunity to review the way people talk about and respond to the situation, for example, women knowing what lies ahead for them being able to hear babies crying around them, but resources not being available to care for them in a place more sensitive and suited to their needs. “Let’s all talk about it” she says, “and just reassess because when I was looking at the protocols, and how there have been no change in protocols for late miscarriage, and haven’t for a long time, I found that really surprising because hopefully we’re all growing and evolving, we all talk more all the time, these kinds of discussions are thankfully becoming more commonplace, not commonplace enough, but I was surprised to realise how outdated some of those systems were. This is part of the big point of telling the story.”

There is no doubt that it will have succeeded in its aim to get people talking about the issue, and hopefully lead to a review of how such tragic events are handled. I have the utmost respect for Kym Marsh, Simon Gregson, and all the team at Corrie for having the courage to take this on, for giving such an intense, powerful and sensitive portrayal, for the thought and consideration that has gone into the story, and the respect and dignity with which it was treated, performed and depicted. It was a genuine privilege to have watched it, and to have been able to meet them to talk about it yesterday.