Friday’s double bill of Corrie was chock-full of comings and goings which gave it an animated, fast-paced feel as it all built up to a nail biting crescendo. Yes, much like the Gavin he was, but actually wasn’t, Andy’s number was up, and it looked as if my lingering question about Phelan came to be answered; could he kill? It would appear he could.

Not content with getting away, Andy appears intent on clearing Kevin’s name via the CCTV on the laptop before his flit to Portugal with Steph, who goes on ahead of him to the airport as a result. I would’ve thought he’d have been more eager to dispose of any footage of himself doing the deed, but in any event, this leads to the discovery of the compromising footage of Phelan which was his reason for wanting the garage burned down in the first place. And who should come knocking at the key moment, only the man himself, having had chapter and verse from Luke about the couple’s departure, including the fact that Andy will follow her, and is alone in the flat. Considering she witnessed this, I couldn’t quite believe that Steph didn’t even call Andy or send him a text to warn him as she departed.

Phelan, none to pleased to see himself on screen, is furious, and things go from bad to worse when he discovers bumbling Andy’s feeble attempt to goad him into admitting everything while recording him on his phone. Let’s face it, Andy was never made to be a criminal mastermind. It’s even a miracle that he got away with being Gavin for any length. So, you’d think having escaped Phelan’s clutches again by promising to destroy the laptop, he’d leave it at that. But no, Phelan’s distasteful comments about Steph and Michael as he browses through Andy’s phone see him clobber Pat over the head.

The fight which ensued had me on the edge of my seat, not least because we were left hanging for half an hour between episodes, and it was intercut with other storylines. It also had me questioning my very moral fibre as I unconsciously found myself rooting for Pat. What have I become?

The laptop proves to be Andy’s downfall in more ways than one, and as Pat prepares to hightail it to his tardy nuptials with Eileen, he appears to be bundling more than himself into his van. As they stand before the registrar, and the camera pans down to reveal evidence of soil on his shoe, I think we can be pretty certain that Andy has bumbled his last. 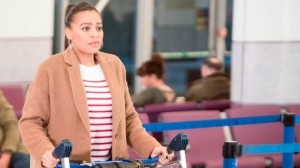 I thought this was all brilliantly played out, with Andy’s fear and Pat’s menace perfectly pitched. But the issue I had with it was Steph’s reaction. Considering everything preceding it, not only did she fail to warn Andy that Pat knew everything, she simply accepted a text from him in the airport, which was actually from Pat, telling her she was better off without him, and headed off. How was she not even a small bit concerned or suspicious? Would she not have expected a phone call from Andy, or rang him for ultimate closure? I guess it was a convenient end to it, but not one I could believe.

Meanwhile Eileen Grimshaw, who looked rather splendid on her wedding day, is now Eileen Phelan, much to Todd’s regret, and what happens next is anyone’s guess.

Steph will be missed on the street, as will Tisha Merry’s performances, as the character had great potential to become involved in a number of storylines. It seemed they were never quite sure what to do with Andy after the Gavin storyline, but I felt his stint as a budding author could have lead to something. I wanted him to be able to say ‘I told you so’ to all those who doubted him. In any event, Oliver Farnworth did a great job, and he’ll be missed.

Michelle’s agony continues as she prepares for Ruairi’s funeral with Billy and seems intent on leaving Steve out of it. There are beautiful scenes when Liz opens her heart about her own loss of baby Katy, and Michelle eventually asks Steve to come home.

Sally proves predictably po-faced at Tim’s purchase of a tandem to make up for the earlier gift of a Weatherfield County Season Ticket, but the sight of Michelle gives her food for thought, and she throws public perception to the wind in favour of a joyful ride around the street, much to her pleasure, and ours. With an added David Platt aside to round this humorous story off, it was a little delight.

Elsewhere, Chesney scores another own goal by bringing Sinead’s venus flytrap to the kebab shop for a gurn-a-thon with Gemma who treats it to a fatal piece of doner. Seeing this as the last straw, Sinead promptly breaks up with him, praise be. There is a bit of confusion, as she seems to agree to give it another go, and then it’s off again by the end of the sentence. Either way, this is a couple who definitely need to break up.

Shona is less than happy to see Nathan at the café, and while he’s shocked at the encounter, he seems to take it in his stride. We see the first glimmers of Bethany’s discomfort as he produces a camera and takes her to the tanning salon to film her first hair tutorial. Any doubts she has seem to dissipate however as he flatters and compliments her while they watch the footage back, even suggesting she show more of her figure next time. If you want to find out more about this storyline and what it’s like to play the character of Nathan, you can read my Coronation Street Blog interview with Chris Harper.

Overall, I very much enjoyed this double episode, despite the convenient actions on the part of Steph, and there was a good balance between drama and humour, which is always welcome.