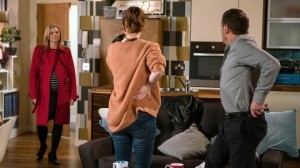 If anything summed up Friday’s double Corrie for me, it was Nick picking apart a rose with that beleaguered face he seems to be permanently sporting these days. I found myself deflated by the amount of unhappy characters, but there was thankfully a bit of humour, albeit sparse.

Mr. and Mrs. Flintstone’s bedrock is finally exposed when Leanne tries to play matchmaker and unearths a shocking discovery. She suspects nothing when her secret text to ‘Fred’ asking him to come to the flat sees Peter Barlow pitch up. But, on learning from Tim that Peter is seeing a woman called Wilma, she puts two and two together and catches the pair kissing in the flat. Nick’s plans to propose end in rubble, and on learning that Eva knew, Leanne makes her relationship with her two sisters extinct, despite protests from the pair that keeping it secret was for her own good.

I’ve been waiting for Peter and Toyah to whisk me away on an exciting, chemistry infused tryst, but so far, it all feels very tame. I’m not saying they can’t have a normal, everyday relationship, but knowing the chemistry they’ve had with other partners, it seems like something is lacking. Hearing Toyah say that Peter was an escape from the pressure IVF was putting on her marriage had me immediately doubting her reasons for being with him, and now that she wants to set him aboard the same ‘treadmill’, you’d wonder how their relationship will react with this pressure brought into it. He has gone from not wanting another child to agreeing to try for Pebbles Battersby-Barlow even after she told him she would pick a baby over him, and so I’m not sure if they will go the distance. In a way, I hope they yabadabadon’t. 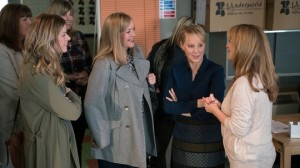 Over at the factory, a scene unfolds which is itself not unworthy of a 1960s American sitcom. Jenny’s idea, to manufacture mastectomy bras, is a great one, and Sally agrees, bringing a group of ladies in to see them at apparently zero notice. But devious Alya throws a spanner in the works by ensuring Johnny will return with a big client in tow just in time to catch the unauthorised meeting. The client threatens to walk until they are provided with some statistics, and learn that one of the ladies is from the Gazette, and smiles abound as it’s all through to the office. Except, that is, for Alya, who may as well have disappeared behind a velvet curtain to plot her revenge in time for the next installment.

Other factory action included Kate telling Johnny she’s resigning to take up a job in the Bistro. I really enjoyed this father-daughter scene which was beautifully written and performed, and it will be good to see Kate in a job which will give her more prominence on the street. Could there be a role for Dirk not Kirk in the packing room, with hilarious consequences? Johnny is a current Corrie favourite of mine, and as Jenny agrees to sign his pre-nup for fear anyone would think she wanted his money, he’s delighted.

Kevin is well and truly in the dog house as Anna discovers he was prepared to have her relive the worst experience of her life in order to sue David Platt and save the garage, even though he had already taken a £7,000 handout from Sally. As an aside, it is a wonder that David was never pursued further by Weatherfield Police for driving recklessly up the street with a car full of petrol, and while we’re on the subject of fires, I’m also confused as to which garage, or part thereof, went up in flames. But, in any event, Tyrone is furious to learn Kevin wants to sack Freddie rather than Sophie, and insists they start doing things his way from now on. It’s good to see Tyrone finally stepping up and coming into his own.

Together with every scene Tim is in, another episode highlight is David Platt’s derision at the appearance of Chesney in the salon, disdain for the place on Tile Street where he normally gets his hair cut, and scorn at his request for a style like Ronaldo’s. Alas for poor Chesney, a homemade sandwich, cream bun and even a new do can’t win Sinead back, and she plumps for some salt and vinegar crisps with Daniel in the Rovers. He may look like a man who might just well prefer the Tile Street barber to the salon himself, but that’s where the similarities with Chesney end, and I think as a couple, they definitely make more sense.