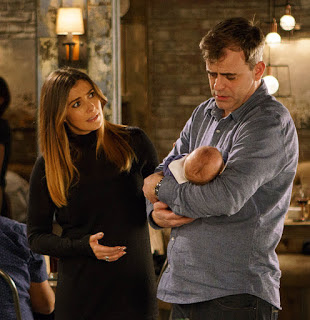 Secrets abounded in last night’s Corrie, but developments in respect of one in particular gripped this stunned viewer. As Jenny blackmailed Richard Drake to reinstate his mastectomy bra order with a compromising photo, Maria struggled with little Liam’s prison visit request to live with Aidan and Eva, and Brian hid his affection for Cathy from Roy, there was a simmering pot of tension unfolding around baby Oliver.

Having agreed to put Nick’s name on the birth certificate, Leanne’s silent discomfort at the lie she has committed to living, together with Liz’s disquiet and Steve’s uneasiness with the entire situation, all culminated to form a growing intensity as the first episode unfolded. Nick’s enthusiasm even seemed fraught with panic at the threat of it all crashing down, and Michelle’s desire for another baby resulted in added strain for Steve.

Gail’s impromptu family party at the Bistro coincided with a visit by Michelle and Steve, and what unfolded, and how, was sheer brilliance. As they looked on, Michelle’s clear attempt to be happy for Leanne and Nick contrasted with Steve’s beleaguered demeanour, and things only got worse as his attempts to avoid his son finally failed with an encounter which could not evade him. First, he was called on to take a family photo, and next, was handed the baby by David who jumped to recover a tray of smashed glasses. I was absolutely gripped as he held the child in his arms and, as if in a trance, declared out loud for all to hear that this was his son.

Of course, this happened at 7.59pm and, once I released my other half from a serious grip, took to Twitter where people were frantic. Could this be the big reveal? Well we hadn’t read anything about it. Maybe we’d tune in at 8.30pm after a seemingly interminable interlude, and Steve’s confusion would be put down to his grief for Ruairi? This would not have been my preference, but after all, we’d seen plenty of this type of thing in the past, and been frustrated by it. Or maybe, just maybe, we were about to see the truth revealed in a timely fashion having not known to expect it. As shock registered and the possibilities were thrashed out, both online and in my sitting room, I watched Mastermind, but didn’t, and all of a sudden we were back for part two. I sat in disbelief to discover that yes, this was it, Steve had confessed and was making no effort to cover it up; Michelle had found out that Oliver was Steve’s baby, Leanne didn’t deny it, nor did Nick.

No spoilers. No dragging things out. No unrealistic recovery at 8.31pm. This was it, and it was fantastic. We were then treated to a highly charged and brilliant scene between Michelle and Leanne in the back of the Bistro which resulted in a bloody nose for the new Mum. There is naturally nothing Steve can say to Michelle to fix things as she storms over to the Rovers where she reveals all in the bar. Jane Danson, Simon Gregson, Kym Marsh and Ben Price put in some of their best performances as it all unfolded, and I can genuinely say I was glued to the screen throughout.

I do, however, have one gripe, and you’ve heard it before. Performances and dialogue of this quality are enough to draw us in, to make us feel empathy and sympathy. The portrayals were powerful, affecting and natural. It was authentic and reflective of the realism that makes Coronation Street what it is, and most definitely didn’t need Radiohead’s Street Spirit (Fade Out) concluding the second episode. For me, this actually did a disservice to a truly fantastic pair of episodes. Nor is the irony of the song title lost on me, as this development is most definitely not in keeping with the spirit of the street. I don’t know if we’ll see the end of incidental music on Corrie anytime soon, but for me, you won’t find a finer example of why it needs to go.

Other highlights from the episode included Jenny Bradley smugly celebrating her double order, lovely signs of a developing friendship between Yasmeen and Rita, Shayne Ward who for me, continues to be compelling as Aidan, and Charlie Wrenshall who is doing a great job as Liam Jr.

We saw Corrie at its best on Friday night, and the lack of any spoilers, together with the quality delivered up, ensured it got the reaction it well deserved. Now, if we could just lose the music…