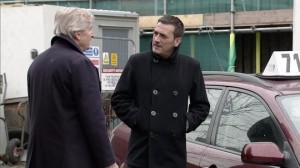 It seems everyone has their suspect of choice when it comes to who attacked Ken, and let’s face it there are plenty to choose from. There is one thing in particular, however, that has left viewers intrigued; Peter’s sudden desperation to get his hands on Simon’s mobile, his dramatic destruction of the device, and the subsequent revelation of a voicemail which he had left his son at 20:35 on the night in question; 28 minutes after the police suspect the attempt on Ken’s life took place. In it he said “Hi Si. Look, I’m really sorry. I’m a bad person. I’ve messed up again. I’m gonna have to get away, I can’t stay here, but I want you to know that I love you, okay? Whatever anyone says about me, whatever they say that I’ve done, I love you more than anything.”

Tonight’s first episode concluded with the voicemail being played in the Bistro for all to hear, and Nick placing the blame for Ken’s attack squarely at Peter’s door.

But could he really have tried to kill his own father?

With everything that’s happened, it’s not easy to recall just what Peter Barlow was doing on the 27th of March, the night of Ken’s attack, that might explain this alarming discovery, and allow us to decide for ourselves if it’s an effort to evade being caught for attempted murder.

DS MacKinnon might think she has a thirst to get to the bottom of a case, and even though I’m more of a Jessica Fletcher when it comes to sleuthing, I do like a good mystery. So, I did a bit of investigating of my own and I present to you the case of Peter Barlow.

24th of March – 3 days before the attack

Peter learns Tracy can’t get the money to allow him buy the Rovers, and is shocked and furious to see Chloe turn up to gazump him. He threatens her to “Stay away from me, stay away from this street, or I won’t be responsible for my actions. Now, you go home.” Eek!

Her subsequent chat with Ken is littered with truths, half-truths and full-on porkies and he tells her, “you’re not the first person that my son has lied to and hurt, but I’m gonna do my best to make sure you’re the last.”

Peter reveals Chloe’s identity and her wish to get even to Liz and Steve, and they keep the pub on the market just in case.

Ken then tells all to Toyah. On Peter’s return, she asks him if has a guilty conscience and he says no. They fight, and she reveals she knows everything, and it’s thanks to Ken. Simon arrives and she tells him his father has been seeing someone behind her back.

Peter calls to Ken, unleashes a diatribe and trashes a chair. Ken says he wishes he could believe his “lying alcoholic” of a son. Peter responds, “You know I just about had the right idea getting away from here, from you. Save your breath. I don’t want to hear it. I don’t want to see you, I don’t want anything to do with you. You are dead to me.” Heavy stuff, and an amazing scene.

27th of March – date of attack

Toyah is in Leanne’s ignoring Peter’s calls. Ken meets Peter in the street. They have an altercation where Ken attempts to patch things up, but Peter realises his father still doesn’t believe him and accuses him of ruining his life, declaring, “I’m telling the truth, I’ll prove it to you”.

Peter barges into Chloe’s to giver her a piece of his mind, but she asks him to get down on his knees and beg for pity. “Not a chance, you psychotic cow, you’re insane” he spits before letting himself out. 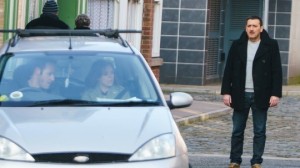 Toyah does a flit with Toby as Peter attempts to open the door of the car and stop her, but they speed off leaving him alone in the street.

Peter hits the Rovers demanding a drink. He grabs a bottle of whisky and leaves £20 on the bar. Back at the flat, he eyes up the whisky and considers ringing Toyah, but doesn’t.

Liz fills Steve in about Peter and the whisky, and he calls to the flat where they talk self-destruction. “I don’t need to lift a finger Steve” Peter says, “I’ve got me very own wrecking ball. Me Dad.” He muses about how Ken has poisoned Simon against him. “I’ll never ever win while he’s around. I’m an inconvenience. After all these years he still treats me like I’m a child” he tells Steve.

Steve asks why he doesn’t cut ties with Ken, and Peter notes it’s easier to do so when your father’s in prison. Steve has to go look for missing Amy, leaving Peter alone in the flat. Tempted to drink, Peter instead smashes the bottle and moves to go out.

Ken is in his chair listening to music when there’s a knock on the door. It’s Sinead who appears to give up and walk away. The back door opens as Ken is midway up the stairs. He calls out, looking towards the kitchen, but proceeds on up.

Toyah and Toby return and fall out when she chooses Peter. Daniel finds Ken at the bottom of the stairs and Phelan standing over him.

Toyah bumps into Peter leaving the flat all packed up. She notes he’s cut and he says he smashed a glass. Peter sees the ambulance arrive and remarks, quite genuinely, “Where is that stopping?” He then runs over to number one.

As Ken is loaded into the ambulance, a deeply worried Peter asks Daniel if he will pull through. “Yeah, yeah, course he will, he has to” is the reply.

31st of March – four days after the attack

Peter admits to Toyah he was running away. She asks why, and he says “I had a million reasons, I got Chloe turning psycho on me, me Dad thought I was having an affair, I’m a rubbish Dad to Simon, I came this close to drinking again. I’m sorry. Listen to poor me. You know what, I’m just as sick of my pathetic excuses as you are.” They reconcile.

So there you have it.

For my part, Peter has seemed genuinely worried about Ken in the aftermath, and is the glue holding the family together. I just can’t believe, despite some of the things he said, that Ken would have fallen at his hand. He has also been subjected, deservedly or otherwise, to immense distrust and a lack of faith, and I think he was getting out of town because nobody believed him about either Chloe, or his drinking, and he felt there was nothing for him in Weatherfield. I feel the voicemail apology was for letting his son down for the umpteenth time, and the appeal not to believe what anyone might say he’d done related to alcohol and the affair, not for attempting to kill his father. I believe this voicemail was left from the flat, and Peter packed up and was set to depart just as the ambulance was arriving for Ken.

I think he foolishly attempted to destroy evidence of the message for fear people would misinterpret it, which, it appears, is exactly what has happened.

Of course, all of this is complete speculation, I’ve no idea who attacked Ken, but having looked at all the evidence regarding Peter, I really don’t think it was him.

Big developments in tonight’s second Corrie saw Peter confess that a row between Chloe and he occurred at the same time as Ken’s attack, and she has the injuries to prove it from an accidental fall. However, we’ve just witnessed his attempt to get her to vouch for him go catastrophically wrong.

One thing’s for sure, somebody’s not telling the truth, but I still don’t believe he attacked Ken. Is all of this enough to convince you of his innocence?

This blog post also appears on the Coronation Street Blog.