It’s another Friday night, and another arrest in the strange case of who pushed Ken as DS MacKinnon sets her sights on her latest suspect, Adam Barlow. Cue round forty of suspicious glances as the news filters through the clan who, it has to be said, look a tad fatigued at the development. It gives Tracy more cause for concern than most, however, as Amy reveals it was her that called the police.

Adam’s fingerprints appearing on a kitchen worktop that was fitted the night of the attack pins him to the scene, but surely not the specific time. Confused about the worktop? You’re not the only one. In any event, Adam’s currently in the frame, and as Peter, not the police, delivers the news to Ken, he sorely wishes he could remember what had happened to him.

As I’ve said before, I’ve loved the expansion of the Barlows, the performances by all involved, and the drama that has unfolded, but it is complex and very detailed, and I admittedly have found myself watching and reading back to refresh my memory on various aspects of it. In all my time as a Corrie fan, this is a first. Maybe such complexity suits a film, play or extended episode where it’s the entire focus, and everything is wrapped up within a timeframe that ensures it’s remembered in its entirety. But with soap, where something plays out over long periods, is interspersed with other storylines, and with days between episodes, it’s not as easy to immediately recall where everything is at with a plot so reliant on us recalling such detail. 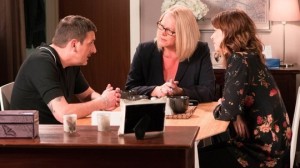 There are added dubious expressions chez-Toyah as she and Peter meet a solicitor to discuss the Chloe situation. Pressed to be honest, he reveals he both flirted with and kissed her, but pushed her away “after a few seconds”. Toyah is none too pleased, and the fact that he withheld this from her up to now has to have her wondering if he’s lying about anything else. He isn’t kicked out, however, she merely heads for a bath with a cross face. I’m still of the opinion that having a baby is her number one focus, not the relationship, and that there is no chemistry between this couple. Again, this is apparent because we’ve seen how brilliant they can be with other partners.

Suspicions also abound at the factory where Johnny seems frustrated at the volume of wedding talk afoot, and Jenny’s bid to rival Miss Havisham with her wedding “nerve centre” in the stockroom. Determined to confront her about stressing her Dad out, drunken Kate is struck dumb when asked to be bridesmaid. I’m disappointed if health issues or difficult times lie ahead for Johnny, not least because I like the character, but there are already enough serious storylines without adding another.

We already know Nathan is sinister, but the level of manipulation underway really showed itself in these episodes. Taking a photo of Bethany making breakfast in what appears to be one of his shirts, and the response he receives from his acquaintance Neil after texting it to him, is vile. Worried Sarah is furious to hear Bethany hasn’t been going to school, and Nathan suggests he approach her to smooth things out. It seems every encounter presents an opportunity to further his plans, however, and as he deceives both mother and daughter, he succeeds in driving a serious wedge between them.

As Bethany tearfully delivers the news to Sarah by phone that she is moving in with him, and he sits goading her while Sarah cries at the other end of the phone, there is great sympathy for the pair and it shows the level to which someone can succeed in manipulating others to meet their own ends. While this is not an easy watch, it is being handled and portrayed brilliantly by all concerned.

Even the prospect of Freddie moving on isn’t enough for Rita to take his olive branch of an invite to his leaving drinks in the Rovers. I’ve always liked Rita, and thought it was disappointing that she’d continue to hold a grudge over a fruit machine argument that should never have happened. In any event, it sets the stage for Freddie to arrive in with the £100 she wasn’t entitled to, and a poster for one of her shows in the Zambezi. Despite the fact that I think she was in the wrong, it turns out to be a very touching scene. As is the one in which he says farewell to Max and Lily and remembers how Kylie had been so good to him.

It’s a shame to see Freddie go without ever having gotten to be a strong part of a main story. I enjoyed his relationships with Audrey, Luke and Tyrone in particular, but his role never went beyond a certain level. The fact that he doesn’t turn up to his own leaving party seems oddly symbolic of his time on the show; always around the action, but never wholly in the centre. Hopefully Derek Griffiths will return to reprise the role some day with a meatier storyline.

Rob Donovan finally reveals to Tracy what led to his escape. As stories go, well, it was out there. A prison gang, corrupt prison officers, an attempted suicide by an assaulted cell mate, Rob doing the right thing by risking his life and telling on them, a transfer to a safer prison disturbed mid-journey by outside gang members deliberately crashing into the prison van, Rob escaping, and it never making the news, or even social media. Wow. Not even Peter Barlow could come up with a yarn as sensational. I’m not saying I don’t believe Rob, but it’s quite the tale. On hearing this, Tracy decides it’s all too risky to keep harbouring him, and you’d wonder what he’ll do next.

It was beautiful to watch tonight's pink moon from the safety of the house. #nofilter #nofilterneeded #PinkMoon #Supermoon #stayhome #staysafe #stayathome #moon
Five years ago. Where does the time go? I was so proud to graduate with first class honours from my MA in Film and Television Studies with DCU.
Happy St. Patrick's Day! ☘💚 I'm enjoying a virtual tour of some of my photos of Ireland for the day that's in it. Here are St. Stephen's Green, Newgrange, and Balbriggan. #LaFheilePadraig #StPatricksDay #paddysday #photosofireland #dublin #ireland #meath #ststephensgreen #stephensgreen #balbriggan #OurBalbriggan
The Rockin Road Festival 2020, at which I was due to play, is cancelled. Sad news, but it's the right decision. For full details, and to keep up to date with the announcement of a rescheduled date, visit the Facebook page. #rockinroadfestival2020 #rockinroad #RockinRoadFest #rockinroad2020
Sharing life with this legend since 2015 🐱🐾
IKEA knows the score. I went for the cushions. I stayed for this wisdom.