It has been an absolutely gripping Big Week on Corrie so far, and day three is no exception. The stage is set with Daniel locked in the bathroom while frantic Ken tries to talk him round and Denise stands in dismay, Nick sinking steadily while being badmouthed elsewhere, and Shona lying unconscious courtesy of Nathan’s heavies while another evening for his friends looms large for Bethany.

Gemma, a dead bird and an under-ladder snog for Brian and Cathy, which flies in the face of his superstition, is the only light relief. That and the sight of Erica, although that just reminded me of my disappointment that she is leaving, so for me her job of distracting Anna while Kev and Tyrone set up a surprise birthday party for her didn’t quite have the intended effect.

Seeing Nick panic as he sinks deeper is far from easy viewing, but Peter and Steve’s about turn from bad mouthing him to searching for him comes on quicker than the tide, the sight of which is quite arresting, and this ultimately leads to his rescue. It wasn’t looking good at all, and I did wonder at Peter’s barrage of insults designed to make Nick fight for survival; he was clearly a stationary object at the mercy of the sand and water. I was actually flabbergasted that he survived, and was full sure a beach induced demise lay in store for Gail’s eldest.

Things are very grim at Nathan’s where he supplies Bethany with all of her clothing, takes off her engagement ring, and invites more men around than we’ve previously seen in the flat. She has already thrown a present from Sarah in the bin, so it seems she’s not going anywhere despite her apparent discomfort.

With Nathan spiking her already alcohol-laden drinks, it’s not long before she’s under the influence. When she spots a girl coming out of the bedroom and accuses her of wearing her necklace to which the response is, Nathan buys them for all the girls. Bethany rages, and Nathan takes her offside.

Mel continues with that shifty look she’s often sporting. It’s a mixture of knowing doubt, fear, and disapproval, but she appears so completely controlled by Nathan herself that it seems actions don’t necessarily follow any feelings she might have regarding what’s happening.

Meanwhile, Shona lies unconscious and is rescued by Craig on his way to see Bethany. It’s sweet to hear him recall his CPR training out loud, but it’s not needed as she appears to come around as he calls an ambulance.

Rob Mallard continues to play an absolute blinder as Daniel suffers dreadfully in the aftermath of his mother’s return. Ken is frantic and in as much control of the situation as he can be while Denise looks more at sea than Nick. As she blames her prolonged absence on a mental breakdown, Ken tries to make her see the impact that abandoning her son has had on him, and that her arrival back couldn’t have happened at a worse time. 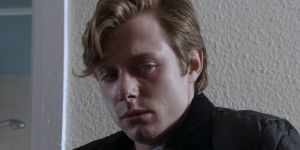 Meanwhile Sinead discovers the blood soaked poetry book in front of Chesney who we can only presume called the police, as there’s no way on earth that DS MacKinnon would’ve made the deduction or known to find him there. Daniel admits to attempting to murder his father and is arrested while Ken tries to stop it and Denise remains agape.

High drama is the name of the game this week, and while it’s a difficult watch, I have been glued to it and will continue to be. I’ll be honest, I wouldn’t usually want to see some of what’s being portrayed, but the performances have been second to none, and I would happily watch Rob Mallard in particular in every scene.

I’m already waiting for 9pm tomorrow, and a Thursday Corrie does hold a little novelty factor. I will enjoy forgetting it’s on, then remembering, and feeling extra excited at some point tomorrow. For now, I’m going to take my golden moment of opportunity for a cuppa after all that drama.