Weddings can be an expensive business, but the stakes are higher than your average where Eva Price is concerned. Intent on wreaking revenge on Aidan for his infidelity, Maria for breaking the sacred ‘girl-code’, and Jenny for keeping their secret, the question is, at what cost?

I caught up with Cath Tyldesley, who plays Eva, at Coronation Street studios in Manchester to hear all about the Big Day. If you don’t want to read any spoilers, it’s probably best to look away now.

Describing it as “very action packed”, there is no doubt that Cath enjoyed every minute of this epic shoot. But what could she tell us about the events which lead up to it, and what unfolds on the day itself?

First up is the hen party, which, we’re told, is used as a way to get at Jenny and Maria. “She’s just vile to Maria” explains Cath before revealing details of a humiliating stunt pulled on her in the Rovers which I won’t spoil for readers. “I really felt for [Samia] because [Eva] just goes for it” she tells us, “but she deserves it in her eyes.” It’s interesting to hear that Maria is to bear some of the brunt of her revenge as, up to now, Aidan has seemed the main target. So, does Cath feel Eva is more angry at one over the other? “It’s both of them” she explains. “But what I quite liked is that, for years actually, whenever she’s talked about being cheated on, she’s spoke many times about the girl code and how much she despises women that do that. So the fact that it’s her best friend that’s done it is just another level for her. Her feelings for Maria are completely gone now, there’s nothing left, but she does still love Aidan despite what he’s done.”

Love him she might, but she is still hell-bent on revenge, and he manages to flatten the champagne on the morning of the wedding by confessing to his affair. Cath explains, “It’s a real game changer that for Eva… she can see the absolute sincerity in his eyes, she can see how genuine he is and that he does actually really love her and the whole thing to him has been a massive mistake.” She continues, “She had the day completely planned out to a tee. She’s got this revenge plot firmly in her mind and then all of a sudden she’s like, ‘he’s offering me everything I ever wanted and he’s come clean’.” It wouldn’t be Eva, however, if this wasn’t tinged with irritation. “At the same time, she was really angry with him, because she has this firm plan and she’s like, ‘oh, now you’ve done this’…so there are lots of different emotions.”

Nor would it be Eva if she didn’t capitalise on an opportunity to take down her nemesis when Maria gatecrashes the wedding and, as we’ve seen in the official Corrie promo video, the pair swap the chocolate fountain for a real one. 2.5 hours and no less than 6 very heavy, completely ruined, wedding dresses later, the pair were tired out after thrashing it out in the water, but both really enjoyed it and Cath clearly felt it was worth it. “I was just really excited about it, to be doing something that physical” she explains. “Normally it is very coordinated, but because of the nature of the scene they were like, ‘Just go for it guys’ and me and Samia were like, ‘Oh my God’. And we did, we just went for it, you know, within reason. We’re kind of both aware of what we should and shouldn’t do. But yeah, it was pretty full on.” She continues, “It was good fun, I really enjoyed doing that actually.” It wasn’t all high drama either, “Andy Whyment plays a blinder in the fountain scenes” she reveals, “I just find him hysterical anyway, so yeah, it was really funny stuff.” 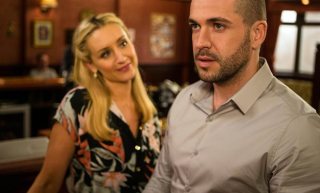 So, what does Cath think about the emergence of this villainous element to her character? “I’ve loved it, I’ve absolutely loved it” she enthuses. “It’s been really nice to see another side to her because, when she came into it, she was a woman scorned and you know, she is her mother’s daughter, they are strong, feisty women. And I think Eva is a very likeable character and her vulnerability and her dizziness makes people like her, but I think this is great that we go, ‘oh crap, yeah, we forgot about this side to her’.” She continues, “Every boyfriend that she’s ever had has cheated on her. At some point you are gonna lose it, and this is character changing for her, this is it now, she’s had enough.”

Asked if it’s likely that something could develop with Adam, Cath tells us, “I think for her at the moment she appreciates that he’s a good looking guy and it’s been a shoulder-to-lean-on sort of thing for her, but her heart is with Aidan.” But can Eva ever forgive him? “Yeah, I think she could. I think for her, that was her prince charming, I think she loves him that much.”

Having just gotten married herself last year, Cath found it weird to be back in a wedding dress and in bride mode again. “The way everything was shot, we tried to do things in order as much as we could cos of the nature of the scenes, it did feel like I was getting married again. It was bizarre” she says. “But yeah, I loved it. Who doesn’t love putting a big frock on? It was the first dress I saw and I knew in my head exactly what I wanted ‘cos I choose all of Eva’s outfits, and as soon as I saw it, I was like, that’s the one.”

As my interview with Cath coincided with the announcement that Corrie’s sixth episode would comprise a Wednesday double and start on the 20th of September with this very wedding, I was interested to hear her thoughts. Speaking of Kate Oates, Cath says “she’s just fantastic, she’s an absolute powerhouse. Everything has been structured in a way that nobody is overloaded, and everything is quite evenly spread, so it’s been great for us. And, as a viewer, I’m really excited because it’s just another episode.”

All that remains now is for us to choose a hat for the 20th, and position ourselves as far from that fountain as possible.

Meeting Cath was lovely. Her enthusiasm and sense of humour is very infectious. She was also, in fact, the captain of my Rovers Return pub quiz team on the day, but more on that later…