There’s nothing quite like a Corrie wedding, of which there have been plenty. But we’re promised that, when it comes to the pending double nuptials of Aidan and Eva, and Johnny and Jenny, we’re set to see the biggest, most lavish and dramatic of Big Days to date.

I travelled to Coronation Street studios at ITV, Manchester to get a taste of the wedding fever afoot, and had the pleasure of interviewing the actress, Twitter warrior and all round legend that is Sally Ann Matthews about what lies ahead for bride-to-be Jennybradley. If you don’t want to read any spoilers, then now’s the time to look away.

Getting into the spirit of it all at Corrie is never difficult, but the fact that our interview took place in the Bistro, which was decked out as if we were attending a wedding reception, certainly added the wow factor.

One of the most amusing aspects of the drama so far for me has been Jenny’s increasingly futile efforts to make this a classy affair, and as Sally Ann Matthews sashayed through our impromptu wedding venue with a glass of champagne in hand, I got an entertaining flavour of the force of nature that is her onscreen character.

Once settled with her bubbly, she gave some great insights about what it’s like to play Jenny, and the drama to come.

Having known about the wedding six months before getting the scripts, there was some excitement with she and Shayne Ward attempting to piece together snippets as it was being storylined. “It just kept sounding more and more amazing” she tells us. When it finally came to filming, she says, “It was an absolute joy to do.” Complimenting the director John Anderson, the crew and the staff of the venue, she describes the experience as “all pretty brilliant really.”

“When Corrie is 150 years old, you’ll have a clip of this wedding, it’s that epic” she enthuses. “The entire week’s worth of episodes are jam packed with a number of different stories that all come in and intertwine and there’s high drama, there’s heartbreak, there is ridiculous comedy which is such classic Corrie stuff and it all mixes and melds together really well.”

Sally Ann reveals that Jenny swaps her horse and carriage for a motorbike, and special considerations needed to be made on foot of this when choosing her Suzanne Neville wedding dress. Describing the scenes themselves as “Terrifying”, Sally Ann adds, “I’m totally risk averse. I do all talk, no action.” It helped that they had two genuine Hell’s Angels, on hand to help with the scenes.

We’re told that Rita comes to be hospitalised, which puts Johnny and Jenny’s wedding in doubt. So how will Jenny react to this? Sally Ann describes her fury at Gemma for not telling her about Rita’s illness, even though she may very well have, acknowledging the self-obsessed side of her character which led to her missing signs of Johnny’s illness.

While we don’t know what lies ahead for Rita, it is with great reverence that Sally Ann speaks of her colleague Barbara Knox. “Barbara is a fantastic actress, and the consummate professional, and the three of us, with Dolly as well, they’re very easy scenes to do because you’re all in it, you’re all on it. The emotional stuff is very easy to play with Barbara” she tells us, adding,“They are going to be tugging at your heart strings.” While she doesn’t reveal what might happen, Sally Ann believes that Twitter will likely go crazy on Friday the 14th and the rest of the following week.

We’re told that a discussion concerning this storyline took place with the producer many months ago, and is something Barbara Knox is fully on board with. “It’s a storyline that Barbara is so deserving of” Sally Ann tells us. “It’s been so well thought out and she’s been very involved in the way it’s going to play out.” Sally Ann had high praise for the amount of hard work Barbara has put in, with long hours and continually seeking to challenge herself with the story. 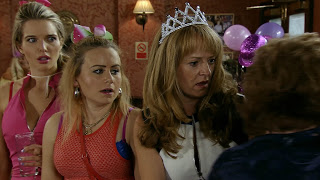 So, while we don’t know the outcome, are we likely to see a change in Jenny’s character? Sally Ann notes that Jenny has had her challenges with this wedding, what with having Gemma as a bridesmaid and having to share her day, and describes it as an important way for Jenny to say, “I am here, and look at me, and my life is wonderful and sorted out from where it was a couple of years ago.” However, while noting Jenny is not ‘soft’, Sally Ann reveals, “I think you might see her reassessing and evaluating and thinking about what’s important.”

Asked about her character’s famous withering looks, Sally Ann tells us “I think the ‘upper-downer’ is my favourite”, before treating us to one which, I can tell you, I was happy to be on the receiving end of for entertainment purposes only.

Sally Ann has fully embraced her return to the show and is really proud to be part of it. “I only ever thought it would be 6 months or so” she tells us, adding “I’m having a really good time and I’m being served with really nice stories. I’m very lucky that they keep writing bonkers stuff for me.”

As a very active member of the Twitter community, no interview with Sally Ann would be complete without asking her about her experiences on the platform. Not one to shy away from taking down the trolls, it’s the left-of-field tweets that continue to take her by surprise. “The rest of the time you’ll get ‘you’re a bitch, I hate you’ with a kiss, and that’s fine, and it’s usually when Corrie’s on, or someone’s talking about it, and so it’s linked to that. When it’s half past two on a Thursday afternoon and randomly someone’s calling you a ginger doo daa, then I’m going to bite back aren’t I.” she tells us, and we’ve no doubt about that. But what is her experience in the street? “Either they have got no idea who I am, or some people are very nice, and a lot of people I think are actually quite scared” she explains, revealing that she knows people have clocked her, but unlike the old days when they would have said something, they’re now reluctant to approach her. This, I’m sure, is in no small part down to the fact that she thoroughly inhabits her formidable character, the return of which, for me, has been one of the show’s great triumphs in recent years.

Interviewing Sally Ann was an absolute pleasure, and while we have no idea how things will pan out, this certainly promises to be a great week on the cobbles, and one I’m very much looking forward to.

You can also read my interview with Cath Tyldesley, view the Coronation Street Promo Video, and read about the announcement of a sixth weekly episode of Corrie from 20 September.

Light source.
Cute break!
For anyone in need of some tranquility. #Balbriggan #OurBalbriggan #tranquility #serenity #seascape #balbrigganlighthouse
Listen and let the misty evening sea and its raindrops take you elsewhere for a few moments.
Beach walk.
And just like that, I am 5. 🐱🎂🖤