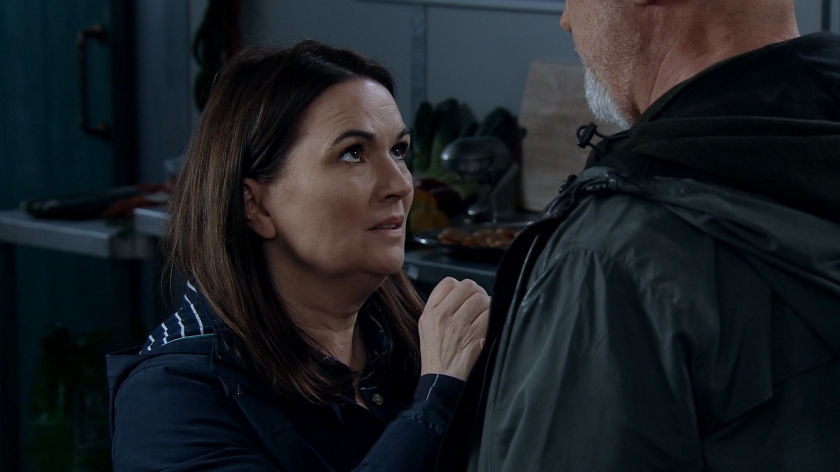 Corrie fans were stunned at the sight of Anna Windass emerging from the shadows of the builder’s yard on Thursday’s Coronation Street (31 May). Aren’t such surprises great? Yes! But, wasn’t she supposed to be in jail? Yes! And tonight, Gary’s madcap plan of bringing Phelan back to Weatherfield all made sense – his Mam had been released from prison, and considering all that she had suffered at Pat’s hands, there was only one woman who could and should get to bring him down. Gary gave her that opportunity.

We attended an exclusive preview of this week’s episodes last month, and had the privilege of knowing Anna was coming back, and sitting down with Debbie Rush to chat all about it! It felt deliciously secret, and my anticipation of the fan reaction only added to the enjoyment.

Debbie was determined that nobody would find out that she would be returning, so much so that she worried her social media profile would give it away. “Our viewers and everyone have always been so lovely and complimentary” she says, “so I just went quiet for a couple of months, ‘cos I didn’t want to tell any lies to our viewers.”

Tonight we saw Anna deliver the fatal plunge of a knife into Phelan’s chest and unflinchingly tell him that people like him never win as he died before her eyes. Asked if she feels it is a fitting end, Debbie says “Yes, she had to be the one to kill him, he was an evil vicious man and Anna was his first victim on that street, so she had to be the one that killed him off, and I think that our viewers and the nation will thank her for it!”

Might there be any possibility for Anna that he’s still alive? “We do see him being zipped up in a body bag. She’s done the fatal wound and she waited till he drew his last breath. So she knows his dead.” confirms Debbie.

Describing what it was like to film the scene, she says “It was great! We have stunt people on the set and we had paramedics. A lot of work went into knowing exactly where Anna had to stab him, without there being too much blood spurting out everywhere, but it would be fatal when he pulled it out.”

Did she feel daunted by the scenes? “Because I know him, no” Debbie says. “But when we’re filming, I go somewhere else, so it always feels daunting and the adrenaline kicks in. It’s my job, and I love doing it.”

We’re told that Anna doesn’t stay around and asked if she would return to the show at some stage in the future, Debbie says, “Never say never. I’ve been incredibly lucky, I had a really great time there. I’m in a privileged position, they seem to like what I do. We’ll see what happens. I needed a break.”

I asked Debbie about her favourite Anna moments. “There are so many.” she told me. “I still like when the Windasses arrived in the van at the beginning. They thought the Clampetts were turning up and it was such a special time for us off screen as well as on. We were doing a dream job, and felt incredibly lucky. So, that would be a standout.” She continues, “When Owen left, I was filming those scenes and literally feeling bereft that one of my best friends had left, and when I watch them back on screen, they were great moments. This will be another one. I’ve really enjoyed doing this. Someone has referred to me as Anna Badass, that’s great! I’ve had too many moments, it’s amazing.”

Asked why she feels Anna’s story has gripped the nation, Debbie says, “When we had Richard Hillman, he was a great baddie and we’ve been waiting for a long time for someone to come along who we know isn’t real but is someone who we can all vent our anger at and shout at the telly. I think it’s been great in that aspect, and that people have really got involved. He’s been so vile to everybody.”

One particular stand out scene in tonight’s episodes (1 June) was the one between Anna and Eileen. Asked if she enjoyed it, Debbie says “Yes, because Anna does not have any animosity whatsoever towards Eileen. Eileen was as much a victim as Anna was, just in a completely different way. When Anna went to prison, she felt let down by Eileen because Eileen didn’t believe her – she nearly believed her but Phelan twisted things – so Anna went off to prison and everyone on the street thought she’d lost the plot. So I think at the end when you see the two women come together, it is completely Corrie. But I also think that in the times we live, it’s completely womanhood. These two women recognise that they’ve both been a victim of a really powerful monster, so we had to see them come together and join forces as heroic women.” With such scenes so important to and inherent in Corrie’s inception, I felt myself that it was a welcome return to see such a powerful depiction of support and solidarity between two women on the street.

Debbie is still recharging her batteries since leaving Corrie, but says “I’ve absolutely loved being part of this great show. I’ve watched this since I was a little girl. It was something that I really wanted to do and I was lucky enough to do it. I’d never say never about going back. I think it’s a great job. When I came back I just loved it, it was so nice to be part of that family again.”

Mikey North, who plays her onscreen son Gary, was also there on the day, and their closeness was evident. When asked about this, Debbie says, “that’s what is hard, because there’s a good few in the cast that I’m really close to. I get to speak to them all the time. Sue and I have been out for dinner and things. They’ll always be my friends and that won’t ever change.”

I very much enjoyed chatting with Debbie, and thought she put in a brilliant performance in Phelan’s final episode. It will be interesting to see where her acting career takes her next, and I wish her every success with it.