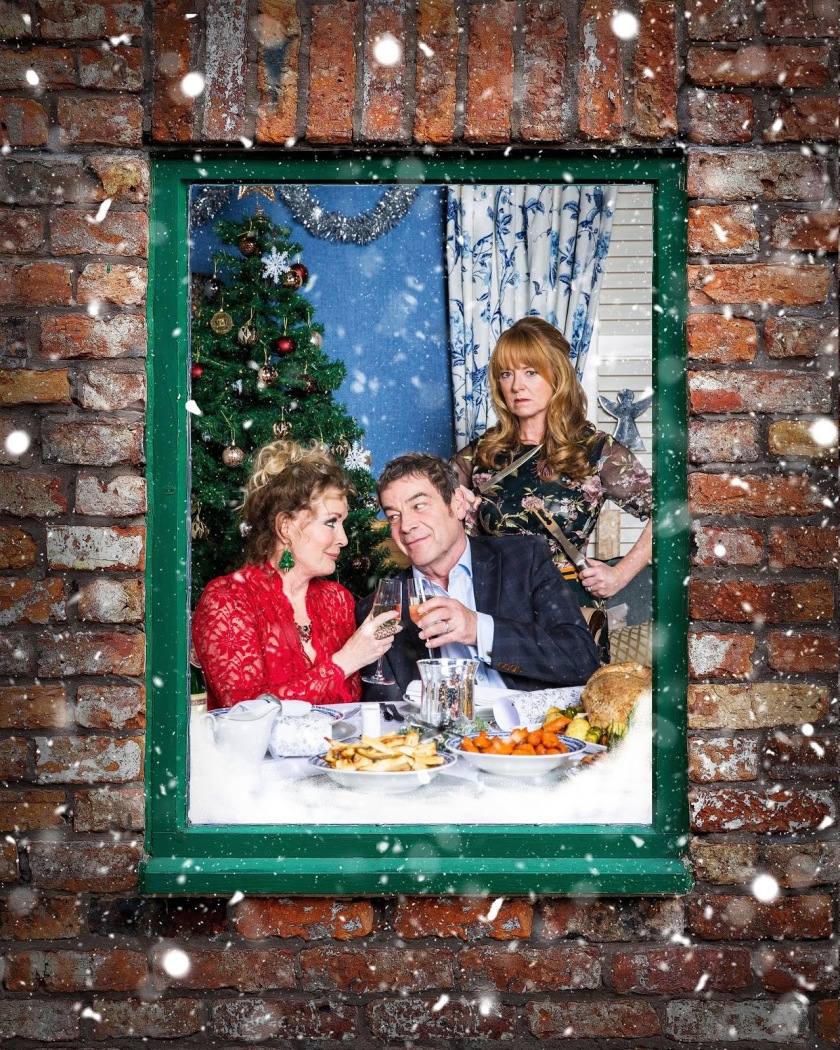 When you sit down to chat with the actor who plays one of your favourite Coronation Street characters, and that character is (in)famous for their (ahem!) style, it’s an added treat when they greet you in full costume. When I travelled to ITV in Manchester with fellow blogger Martin Leay, on behalf of the Coronation Street Blog, to get the low down on this year’s Christmas on the cobbles, nothing could have prepared me for seeing Beverley Callard enter the room in an unholy trinity of lycra, leather and suede. Involuntary squeals of delight erupted at the sight of her garish ensemble, and she seemed as amused with it as we were as she sat down to chat all things Liz McDonald. I couldn’t avert my eyes from this outfit, and nor did I want to, but if you don’t wish to see any spoilers, it’s probably best that you look away now.

We all know that Liz and Johnny Connor have slept together, Jennybradley Connor has found out, and all three now work side by side in The Rovers. What could possibly go wrong? We’re aware that Jenny’s suspicions about them cheating behind her back are rife, as she has been tracking both via a mobile app which has led her to erroneously believe her suspicions are true. Her revenge so far has included ensuring Eileen catches Liz after standing her friend up for Mike Thornberry, and setting Liz up on an escort site which promptly yields a punter. With Jenny’s revenge and suspicion escalating by the episode, where will this all lead? 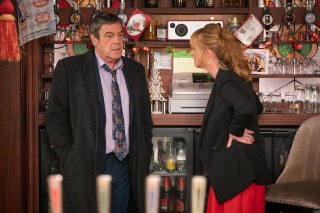 In my recent interview with Sally Ann Matthews, we discussed how Liz and Johnny were taking Jenny at her word that everything was fine after their secret was revealed, and were therefore acting normally. Asked if Liz thinks everything’s okay with Jenny, Beverley echoes these sentiments. “Beverley doesn’t, but Liz definitely thinks that,” she says. “This is how I justify Liz being like this; I think because they slept together once, and after that, even though he wanted more, she turned him down. I think she knew it was a mistake. I think she has got a great fondness for him because they go back so many years, and so because of that, it was quite easy to fall into that situation. But, Liz has never been involved with a married person before,” she notes. “I think she beats herself up about that. I think Jenny most definitely is not her favourite person, and never will be, but I think she feels guilty about it. And, I think she truly believes, naively so, or stupidly so, that Jenny has forgiven her.” Beverley continues, “I think she thinks Jenny is up herself and has got ideas above her station and she wouldn’t be mates with her really, but I think she thinks, ‘well I’m back in the Rovers, and this really is my home and it will work out’ – until it doesn’t…”

So, is Liz any way interested in Johnny at this point? “She really isn’t,” Beverley replies, “and I think she thinks Johnny has got that message, so Jenny will have got that message.”

Meanwhile, Jenny is plumbing new depths with the tracking, and her drinking is proving dangerous to more than herself. Speaking of her placement of Liz on an escort site, and the fact that a punter turned up, Beverley says, “I have to tell you, when I read those scripts I was like, ‘why on earth would they think that?” We all roar laughing. “Maybe he’s into lycra” she jokes, adding “you’d have to be a bit, wouldn’t you.” Beverley explains that she’s convinced Hannah is responsible, thus deflecting culpability away from Jenny. But, whether or not Jenny is found out remains to be seen. 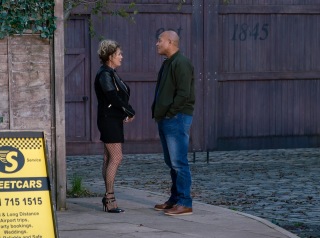 With her spark for Johnny confirmed extinguished, Beverley says “I’m hoping they keep Louis Emerick, who plays Mike. We’ve been mates in real life for thirty years, Louis and I, and we’ve actually played together as a couple years ago. It’s great he’s come in.” I was thrilled to see his recent return to the cobbles, and wholeheartedly agree with Beverley. I think Louis has already brought so much to this part, the chemistry between them is fantastic, and long may it continue.

In scenes which aired earlier this month, we saw Liz hide under the table in the Bistro having jilted Eileen for Mike when she’s not only supposed to be meeting up with her to plan a holiday, but she’s agreed to remain single. In the hilarious scene where Liz is discovered by her friend and identified by her stilettos peeking out from underneath, Beverley explains, “I said, it’s got to be an iconic Liz shoe, it’s got to be really good.” Well, the costume department excelled themselves. I can only imagine how much fun it is dressing a character like Liz. Beverley also described with great hilarity how she lay on the floor in her lycra dress, wrapped in her own check shirt. “I’m under the table sticking my leg out and I’m literally going, ‘are we checking that then? Can I come out now? Are we going for another take?’”

Back to The Rovers now, and Beverley is asked if Liz still feels that the pub is hers. “Oh I think Liz would definitely think that,” she says. Even though she loves working in the Medical Centre with Louiza Patikas who plays Moira Pollock, Beverley adds, “Liz thinks she will be back in the Rovers at some point. I mean, have you seen the Rovers living room on the TV? What the hell is that all about? I think Liz would buy it back at some point, and you know the panelling that they’ve got? She’d paint it burgundy and she’d have lycra curtains or something, wouldn’t she.” Beverley adds, “It’s got to look like a back street pub, hasn’t it. She would think, ‘Why are they doing it like this? They’re wrong!’ but that adds to the magic of Liz, you know?” 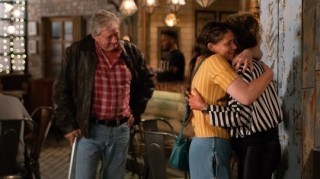 Liz has had a tough year, in the main down to a plot in which Jim returned with a girlfriend, Hannah Gilmore, who posed as their deceased daughter Katie to con her out of money. Speaking about the storyline, Beverley says, “Obviously you can imagine when they said, ‘Actually you’re dead daughter returns’, we were thinking, ‘What? Well I’m not sure about this.’ But, in the end I think, and certainly the viewers seemed to think, it worked well. We were quite skeptical about it. But, I think the way they wrote it, and the twist, was just brilliant.”

Beverley says she was delighted to have Charles Lawson back in the role of Jim. Noting that there is always a will they/won’t they whenever he returns, I ask Beverley if she is disappointed that this may no longer be possible given that what he has done this time would be hard to come back from – are they finished forever? “I honestly don’t think they are finished forever” she says, “because I think the way Charlie and I played it towards the very end – they were coming together again before it was discovered. And he played it with a sense of remorse and that he really did love Liz. And so I think, and I really hope, that they will try and bring him back. I think maybe he’ll somehow get the money to give back to Liz and then I think it will begin again.” She adds, “I don’t know how she could forgive that, but I think there is this chemistry.”

Asked what her hopes are for Liz in the New Year, considering this one has been tough on her character, Beverley says, “I absolutely love doing it but it would be quite nice to have a bit of comedy soon, hopefully. But I don’t know whether that’s going to be the case, I don’t know.” She adds, “It would be good to get a little bit of levity, I think. Yeah, I would like that.”

When she’s not working hard at being the iconic Liz, Beverley loves painting and decorating. “I’m actually doing a course in polished plaster. You think I’m mad, I am aren’t I?” she says, laughing. Describing one job she’s done, she says “I used four different colours on a wall, and the wall’s almost sixty feet high, and I was hanging from ladders and all this – I absolutely love it.”
Whatever 2019 might hold for Liz, Beverley is looking forward to beginning it as part of the cast of the Rocky Horror Show.

As expected, Beverley Callard is a delight to interview, and while she may be a world away from her character in many respects, she certainly sparkles with Liz’s sense of adventure and love of fun.

Let’s hope she gets the comedy she’s hoping for in her fishnet Christmas stocking!

Sun Day
Together or separate?
5k.
Good morning. 💙🌞
One legacy of these tiny sea creatures past is that they brought colour, beauty and delight to one who considered them treasure on a February afternoon.
Each stream finds its own way to the sea.